Skip to main content
RECOMMENDED IN RENT
Moving to NYC after college? Here's how to do it Brick Underground's 2021 guide to co-living spaces in NYC: How to tell the communal disruptors apart The 7 best ways to find a short-term rental while you renovate your NYC apartment NYC apartment leases with major concessions are coming up for renewal. Here's how to negotiate 5 things you should know about renting month to month in NYC
RECOMMENDED IN BUY
How buying real estate in NYC is unlike anywhere else The most expensive neighborhoods in NYC: A buyer's guide for 2021 Buying for the first time in NYC? Be sure to prep your finances first 10 steps to creating a stellar co-op or condo board application
RECOMMENDED IN SELL
A guide to using a no-fee renovation loan from a NYC real estate firm How much does moving to the suburbs cost vs. staying in NYC? What's the best shade of white to paint your NYC apartment if you're trying to sell? Should you sell now or wait? NYC brokers and experts weigh in
RECOMMENDED IN IMPROVE
How to make your NYC renovation more pet-friendly Renovating or adding a kitchen island to your NYC apartment? Here's a checklist The 7 best ways to get your landlord to fix stuff in your apartment Want to use reclaimed materials and appliances for a renovation? Here's what you should know How to deal with flood or water damage in your NYC apartment
Sell

Saying yes to less: A quarter of Manhattan sellers took a loss on deals since June

About 5 percent of deals in Brooklyn since the June real estate market reopening show a loss from the previous sale, according to data from UrbanDigs.

Some sellers in New York—like those who need to get out of the city and can’t wait for market conditions to improve—are accepting offers for less than they originally paid on their apartments years ago.

It’s a bitter pill to swallow: Roughly 25 percent of all deals in Manhattan since the real estate market reopened in June show a loss from the previous sale, according to data prepared for Brick Underground by UrbanDigs, a Manhattan real estate analytics platform. The average loss was 10 percent, and higher-priced properties showed higher losses—for example, Manhattan properties over $4 million saw an average loss of 15 percent.

For today’s sellers, timing is everything, says John Walkup, COO, who created the report.

The contracts seeing a loss were mostly signed for apartments bought at the last market peak in 2014. However, as Walkup points out, a far greater number, 75 percent, signed contracts for a gain. The average increase was 34 percent, with properties below $2 million showing the most gains. Most apartments that saw a profit were bought in 2011, after the credit crisis and before the market peaked.

Walkup looked at contracts signed in Manhattan and Brooklyn since New York City’s real estate market reopened on June 22nd through October 27th. Looking at signed contracts as opposed to recorded sales does introduce a small margin of error of about 5 percent, Walkup says, because the actual price could be higher or lower.

“It would be awesome if we could look at when deals closed. But there is a delay of two to three months before deals are recorded in ACRIS,” he says. “Looking at contracts signed tells us what the last asking price was and gives a snapshot of the market at that point in time.” 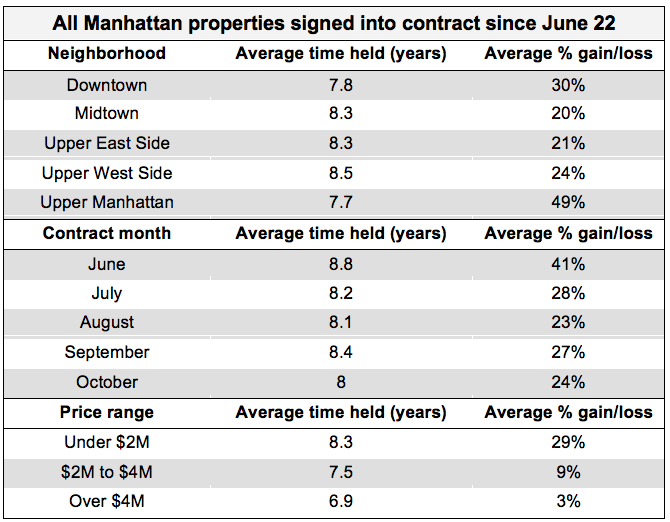 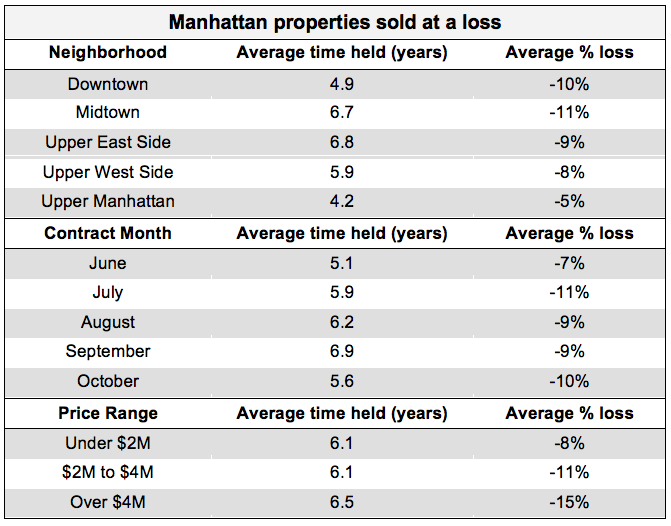 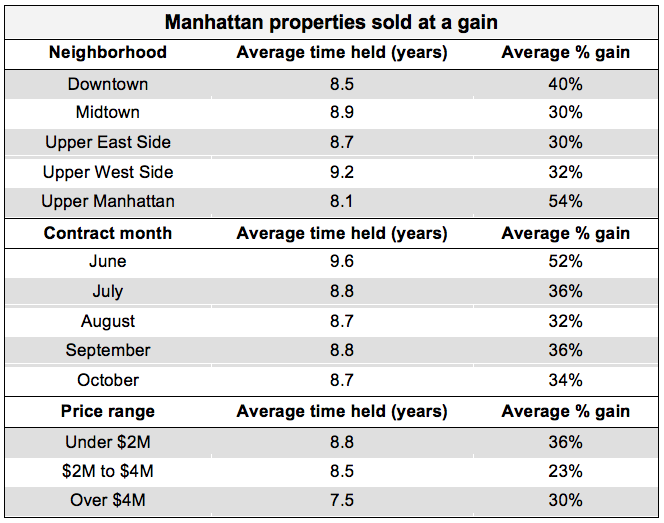 Comparing pricing via new signed contracts is also helpful when market conditions are changing, sales are slow therefore generating few comparatives, and comps from before the pandemic are not useful.

The report is another indication that making money on New York City real estate is not a given, especially when there’s historic economic turmoil. Selling at a loss is probably something that happens more often than sellers care to admit. A previous report from Brick Underground using data from Street Easy found that one in five Manhattan apartments, priced from $1 million to $4 million that were bought and sold within the five-year time period of 2014-2018 sold at a loss.

A rosier picture in Brooklyn

UrbanDigs found that trends were different in Brooklyn, where just 5 percent of deals since June were at a loss from the previous sale. The average loss was 12 percent and was seen mainly for properties below $2 million. Most apartments and houses that show a loss were bought within the last four years.

The average gain was 63 percent, with properties below $2 million showing the most gains. Most properties that show a gain were bought in 2012 and 2013.

“The rising tide of Brooklyn lifted all boats,” Walkup says.

Neighborhoods on the Upper East and Upper West saw more moderate losses and gains than the more speculative market of Tribeca.

The Brooklyn market has seen Teflon prices in recent quarters. For sellers of properties over $4 million, which are likely all townhouses, there were zero losses.

Taking a loss on closing costs and renovations

When sellers accept an offer for less than they paid, they aren’t just taking a hit on pricing, points out Ari Harkov, a broker at Brown Harris Stevens. Sellers have to cover their closing costs and don’t see any return on improvements made to the property.

“People are eating their losses from modest to very significant,” he says.

Perhaps more painful than the math is the blow to ego. “When someone sells at a loss, the market is saying, 'You made a mistake. You overpaid.’ It’s very public,” Harkov says.

Why sellers say yes to less

Brokers say there are good reasons behind that decision.

Some sellers have no choice but to accept an offer for less than they paid. They may be relocating for a job (and have a relocation package) or are not in a position to hold onto the property and become a landlord. It could be an estate sale, or a sale because of financial hardship, or change in lifestyle, like a move to the suburbs.

For other sellers, the decision may be more strategic.

“Some people are willing to take a loss because they see value in a new purchase," says Joanne Greene, an agent at Brown Harris Stevens. “If you want to upgrade, you can take advantage on the buy side.” That's if you buy now.

Some of Greene's clients have relocated and are selling now at a loss rather than keep something they aren’t using anyway. But if clients don’t have to sell right now, brokers are advising them not to, especially if there is no back up plan.

Nada Rizk, an agent at Brown Harris Stevens, says she has clients with a condo on the UWS that they bought for $5.6 million. They are putting it on for $4.8 million and don’t expect offers above ask.

“Buyers are going to come with discounted offers because there’s so much supply,” Rizk says.

Greene described a lack of urgency among buyers today.

“The sentiment is, ‘I love this but let me look around,’” she says. “There are buyers who have come out of the woodwork looking for a great deal. But prices haven’t been cut in half, they may be down 20 percent, so we get some ridiculous offers.

Sales are happening, but they are taking longer because of unrealistic expectations, she says. There’s bigger divide between sellers and buyers today on pricing

Sell Brooklyn's median price holds steady, despite sharp fall in the number of sales
Sell Sales of Manhattan co-ops and condos drop but prices show strength
Co-ops Some New Yorkers really need to sell. Here's how to find them and get a deal
Brick Underground articles occasionally include the expertise of, or information about, advertising partners when relevant to the story. We will never promote an advertiser's product without making the relationship clear to our readers.
topics:
Brooklyn closing co-ops condos contract luxury market reports pricing selling
SHARE
TWEET
BRICK’S PICKS

Looking for off-campus housing in NYC? Here’s what you need to know
THE BU PODCAST