Skip to main content
RECOMMENDED IN RENT
Moving to NYC after college? Here's how to do it Brick Underground's 2021 guide to co-living spaces in NYC: How to tell the communal disruptors apart The 7 best ways to find a short-term rental while you renovate your NYC apartment NYC apartment leases with major concessions are coming up for renewal. Here's how to negotiate 5 things you should know about renting month to month in NYC
RECOMMENDED IN BUY
How buying real estate in NYC is unlike anywhere else The most expensive neighborhoods in NYC: A buyer's guide for 2021 Buying for the first time in NYC? Be sure to prep your finances first 10 steps to creating a stellar co-op or condo board application
RECOMMENDED IN SELL
A guide to using a no-fee renovation loan from a NYC real estate firm How much does moving to the suburbs cost vs. staying in NYC? What's the best shade of white to paint your NYC apartment if you're trying to sell? Should you sell now or wait? NYC brokers and experts weigh in
RECOMMENDED IN IMPROVE
How to make your NYC renovation more pet-friendly Renovating or adding a kitchen island to your NYC apartment? Here's a checklist The 7 best ways to get your landlord to fix stuff in your apartment Want to use reclaimed materials and appliances for a renovation? Here's what you should know How to deal with flood or water damage in your NYC apartment
Renovation

I renovated my kitchen during the pandemic. Was I nuts? Probably

"The renovation I planned was not a tear down. This would be more of Juvéderm treatment than full-on face lift," our writer says. Above, her refreshed dining area. The cabinets at left replace a messy desk area.

Let’s face it, a kitchen renovation is not on the Dartmouth Stress Index, up there with death, divorce and jail, but it should be. Paradoxically, I worked this to my advantage last spring and summer as Covid-19 anxiety gripped the nation. I embarked on a kitchen fix-up project coincidental with the start of the pandemic that diverted my attention. In fact, my renovation stress completely overshadowed any coronaphobia I might otherwise have experienced.

The renovation I planned was not a tear down. No plumbing, electrical, flooring, or major painting. The layout of my existing kitchen was functional and would remain in place. This would be more of Juvéderm treatment than full-on face lift.

From experience, I knew well to start small since inevitably everything turns complicated. There is no such thing as a “simple renovation.” There are always issues, decisions, cost overruns, and unreliable passive aggressive artisans to stress you out.

A death in the kitchen

The global pandemic added a special twist. Suddenly, all bets were off. Let me explain.

This all started while I was tooling around in the Carolinas in early March and received word that the refrigerator in my apartment had conked out.

Some advice: If your refrigerator gives up the ghost while you’re out of town, head home immediately. Do not assume it will be fine to negotiate the purchase, delivery, and installation over the phone even if you stop at every Home Depot between Charleston and Chapel Hill. Murphy’s Law always prevails.

My very capable sister (the one with a doctorate in history of technology, which includes appliances) took care of all the mess a dead fridge implies, filling Igloo coolers with bodega ice to save my precious collection of frozen foods and arranging for a certifiably reliable neighbor (with a law degree) to meet the delivery guys.

Alas, miscalculations happen. I arrived home to discover the new fridge didn’t fit under the overhead cabinet in the space where its kaput predecessor snugly previously resided. In fact, it was sticking out into the aisle of my vintage 1997 IKEA galley kitchen. Items in the cabinet above were only accessible if I pulled the fridge all the way out of its cubby into the middle of the kitchen and scrambled up a stepladder behind it. This was treacherous.

The die was cast. It was time for a fresh new look anyway. It had been time, actually, for the previous 10 years. I enthusiastically committed to the project. It was March 7th—you know, that March 7th, the day Governor Andrew Cuomo declared a State of Emergency.

My first challenge was the protruding fridge. Raising or eliminating the cabinet above it was one solution. In the end, I decided to lop two inches off the bottom of the cabinet and call it a day. How to do this was something I’d figure out later.

The easiest and most economical way to fake a do-over renovation is to simply replace the cabinet doors, exploiting the modularity of the cabinetry. Perhaps I ought to have paid attention when IKEA sent me notice that their entire kitchen system was being made redundant, as they say in England when you get fired, meaning it was being replaced with a superior but incompatible one. This was the infamous 2015 AKURUM/SEKTION switcheroo. And I still had two years left on my 25-year warranty!

I cycled through my options. Replace everything with SEKTION? No, thank you. That violated the spirit of the faux (read: cheapskate) renovation. There was life still in my 23-year-old cabinets and I dreaded removing everything in them, a necessary prerequisite if I swapped them out (read: lazy).

How about custom fronts from the Swedish Door folks? I would have had to drive to Ottawa and back as the shipping costs were prohibitive. So, no. Besides, remember, Justin Trudeau wouldn’t let me in.

What about painting the doors? I lit upon this notion and then settled in, like a butterfly on a day lily, enchanted and aflutter. I called Greg-the-painter to discuss this, the same Greg who hid money in my bookshelf last time he painted for me. 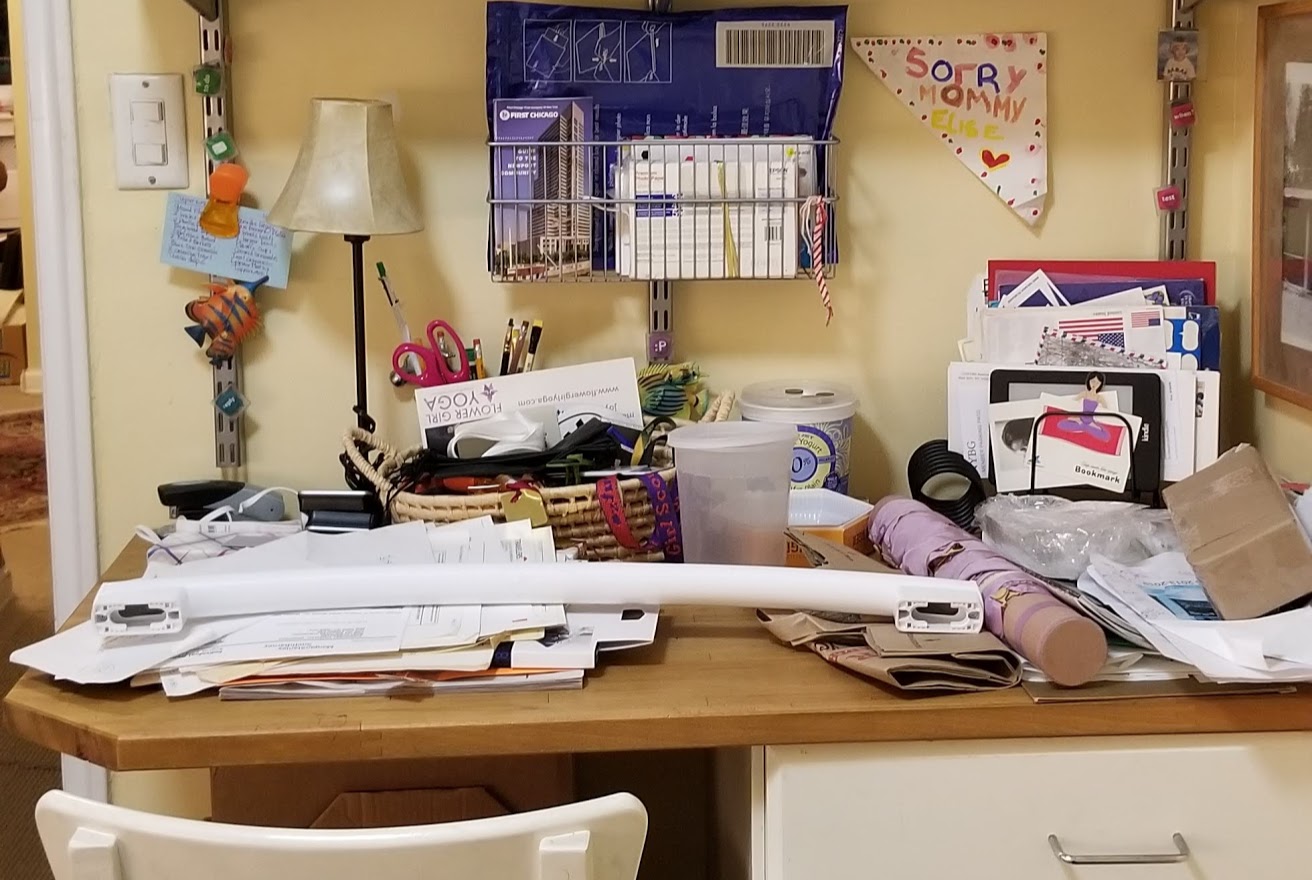 A third project was to terminate with extreme prejudice a desk constructed from an IKEA lower cabinet topped by a piece of butcher block in the eatery end of the kitchen opposite the cookery end.

The kitchen desk was a great idea with a single fatal flaw: I never ever used it. It was a magnet for stuff, clutter, detritus that would make Marie Kondo blush and run screaming out of the room. I concocted a scheme to remove the desk and sleek up that corner with swanky SEKTION cabinetry. I made an appointment for March 17th at the IKEA Planning Studio opposite Bloomingdale’s.

My two-and-a-half-decade-old butcher block countertop could qualify as a Superfund site: It was grimy and scarred from those thousands of “just once” times I used it as a cutting board. I added new countertops to the punch list.

And, as the crown jewel of my kitchen reno, I decided it was time to build a “garbage garage” in an alcove under the kitchen window to tuck various bins out of sight.  I commissioned plans for this in 1999, two years after I replaced the original 1959 kitchen. Amazingly, I found the blueprint tucked in an IKEA folder stuffed with such artifacts as faded thermal faxes and continuous-form-sprocket-fed dot-matrix printouts listing the items I’d purchased for the kitchen’s first renovation rodeo.

Grinding to a halt

Everything was going smoothly. Then, life interfered.

The second week of March, as I zoomed around the city trying to cram everything in (dinners out, back-to-back ballet classes, theater dates, toilet-paper shopping) the slow drumbeat of Covid-19 grew louder. All that activity now seems quite horrifying to me. On Thursday March 12th, Governor Cuomo shut down Broadway. The following Tuesday I was in the Planning Studio mapping out my new cabinetry. At 4:30 p.m., a 21st century Paul Revere galloped around, announcing that the store would be closing early, as in immediately. I was literally the last customer out.

”It’s OK,” I thought, “IKEA will surely reopen in a month.” I took the subway home. No mask, no gloves. Crowded. It would be my last ride on the No. 6 for a long time.

Meanwhile, my co-op building, like thousands across the city, issued its first of many sets of Covid-19 regulations: mandated hand washing, staying six feet apart, and no lingering. No deliveries were allowed beyond the lobby. All apartment renovations and remodeling projects were suspended indefinitely. These complicated my “simple” renovation, amplifying my reno stress.

I consulted my conscience about Greg-the-painter’s visit scheduled for the next day. Could he pass as a relative? He planned to bring along a guy he thought would be perfect for my perfect project. Another cousin? My conscience prevailed. “I’ll check back in a month,” I told him cheerily.

Just because I wasn’t physically renovating didn’t mean I was free of reno anxiety. I spent my time getting my ducks in a row to install the garbage garage, which involved much coop back-and-forth over removing the radiator. I memorized the plans for the new cabinetry. When I was truly feeling footloose and carefree, I’d dial up IKEA and wait on musical hold while streaming E-Street Radio for hours on end. There was plenty anxiety to go around.

I donated the desk to a neighbor. Removing it revealed a two-by-two-foot patch of gray paint in an area previously hidden. My kitchen was now yellow. Matching the paint was a week long adventure. It turns out in our Jetsonian era, this can be digitally accomplished. I painted it myself without mishap, trust me, a minor miracle.

In June, New York began to awaken. IKEA reopened. My cabinets were scheduled for shipping. My days of Allen wrenching long over, I arranged for professional construction, which seemed prudent. The team IKEA sent were genuine experts, whipping together the cabinets like a child’s LEGO set.

I revived the cabinet-door painting project. I decided to have this done outside the apartment to circumvent the quasi-Draconian co-op directives regarding workers in our apartments. I removed every screw from every hinge on every cabinet and drove the doors across town. Later I found out that IKEA hinges detach through gentle pressure on a spring lock. Yet another lesson learned. 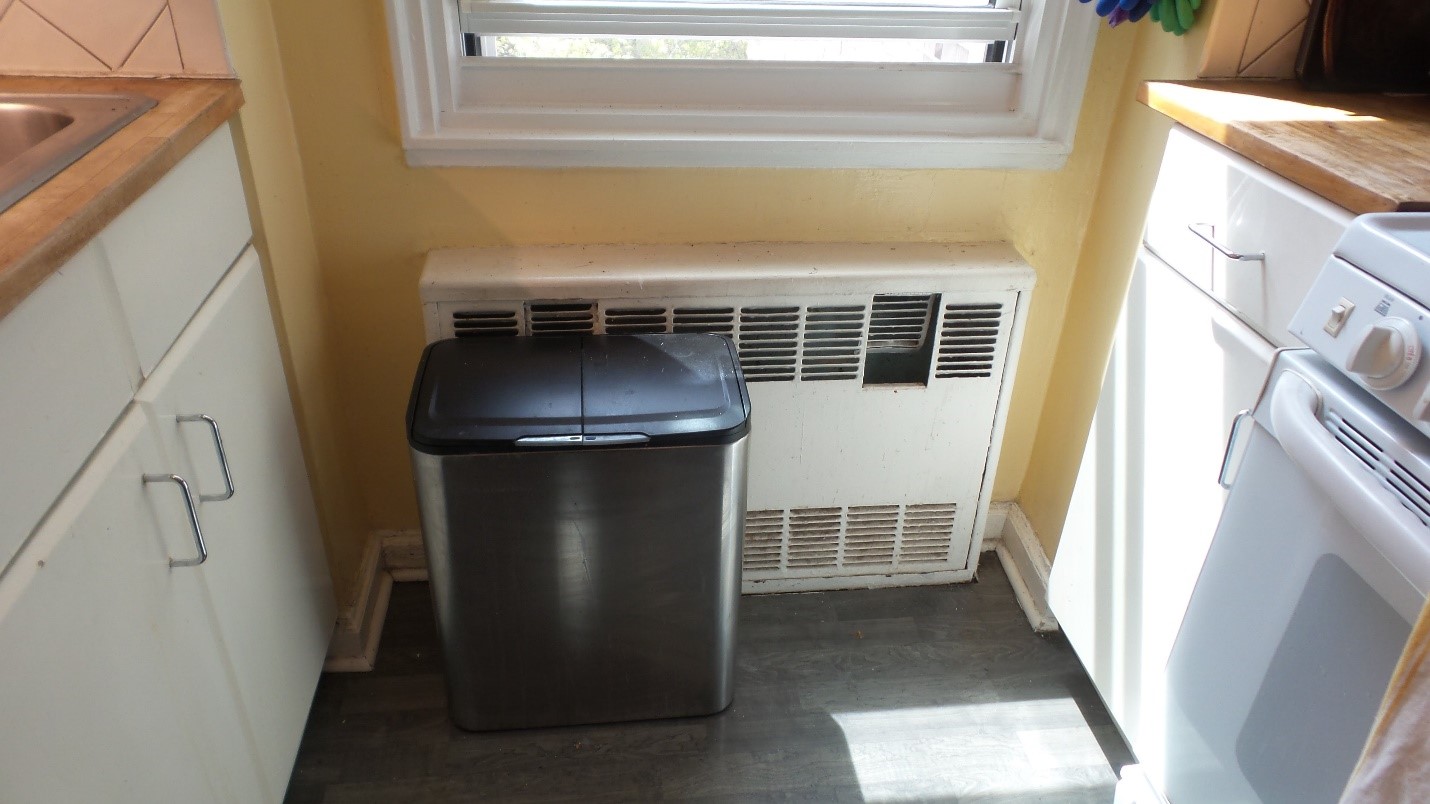 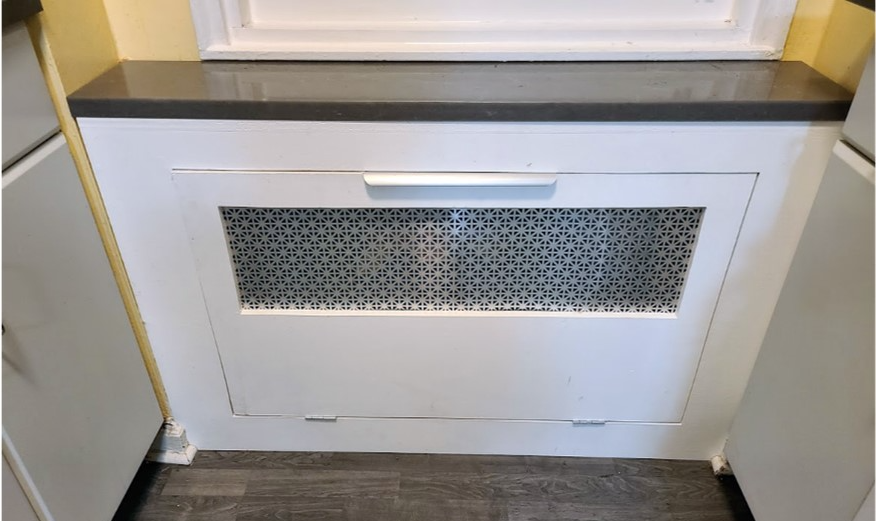 The radiator (top photo) was removed and capped after negotiations on the order of the Treaty of Versailles. I relocated the refrigerator to the eating end of the kitchen and managed to pull down the too-low cabinet myself without getting crushed, commissioning the carpenter building my “garbage garage” (bottom photo) to cut two inches off, allowing the fridge to slide “home.”  After much dithering, I decided on IKEA ersatz poured concrete for the countertops.

Everything looks terrific. Someday I will tell my grandchildren about the Great Pandemic of 2020, and how I got a new kitchen out of it. And someday sooner than that, I hope to prepare and serve friends and family a meal in it. Any day now.

Mary Lowengard is a writer and editor who has been in a New York State of Mind since 1971.

Renovation IKEA vs. Home Depot: Which should you choose for a NYC kitchen renovation?
Renovation Hack your IKEA cabinets with these custom pieces for a more upscale look
Small Spaces My three-decade obsession with IKEA and rules for a successful shopping visit
Brick Underground articles occasionally include the expertise of, or information about, advertising partners when relevant to the story. We will never promote an advertiser's product without making the relationship clear to our readers.
topics:
cabinets & shelving contractors Coronavirus kitchen renovation
SHARE
TWEET
BRICK’S PICKS