Skip to main content
RECOMMENDED IN RENT
Moving to NYC after college? Here's how to do it Brick Underground's 2021 guide to co-living spaces in NYC: How to tell the communal disruptors apart The 7 best ways to find a short-term rental while you renovate your NYC apartment NYC apartment leases with major concessions are coming up for renewal. Here's how to negotiate 5 things you should know about renting month to month in NYC
RECOMMENDED IN BUY
How buying real estate in NYC is unlike anywhere else The most expensive neighborhoods in NYC: A buyer's guide for 2021 Buying for the first time in NYC? Be sure to prep your finances first 10 steps to creating a stellar co-op or condo board application
RECOMMENDED IN SELL
A guide to using a no-fee renovation loan from a NYC real estate firm How much does moving to the suburbs cost vs. staying in NYC? What's the best shade of white to paint your NYC apartment if you're trying to sell? Should you sell now or wait? NYC brokers and experts weigh in
RECOMMENDED IN IMPROVE
How to make your NYC renovation more pet-friendly Renovating or adding a kitchen island to your NYC apartment? Here's a checklist The 7 best ways to get your landlord to fix stuff in your apartment Want to use reclaimed materials and appliances for a renovation? Here's what you should know How to deal with flood or water damage in your NYC apartment
Price Check National Edition

5 houses in Newport, RI, a seaside city with music festivals and historic mansions

This five-bedroom, four-bath carriage house was built in 1850 and has a covered porch.

Newport, Rhode Island, is perhaps best known for its historic mansions like the spectacular one was used for the setting for Jay Gatsby's house in the 1974 film version of "The Great Gatsby," (not a great movie, but the house was beautiful). Famous residences like The Breakers, The Elms, Marble House, and Rosecliff offer tours to the public, so you can get a feel for what life was like for Newport's wealthiest population back in the 19th and early 20th centuries, when the likes of Edith Wharton, the Vanderbilts, the Astors, and the Morgans would summer in town.

There's much more to this destination than lots of immense properties for the rich, of course. Newport, which Coastal Living Magazine named one of the best places to live on the coast in the U.S., has many beaches—it's located at the bottom of Aquidneck Island in Narragansett Bay, and waterside spots like Easton's Beach, Gooseberry Beach, and Bailey's Beach, the latter of which is private but has a portion open to the public, are popular in the summer. Easton's Beach is the start of the 3.5 mile Newport Cliff Walk, a trail that runs along the coastline past some of the mansions.

Newport is also home to the annual Newport Folk Festival, where Bob Dylan infamously "went electric" back in 1965 and Kacey Musgraves and Sheryl Crow performed last year, in addition to the Newport Jazz Festival. There's a lot of good food here—highlights include the Tavern on Broadway, which serves oysters and American fare out of a renovated 200-year-old colonial building; relative newcomer CRU Cafe, which dishes out a locally-sourced brunch; and Flo's Clam Shack, which is known for its fried clam cakes, but also serves up oysters, lobster rolls, and a raw bar.

And though Newport's still filled with multi-million dollar mansions, there's also plenty of more affordable real estate, with offerings running the gamut from beachside condos to classic New England colonials. Here's a taste of what's out there. 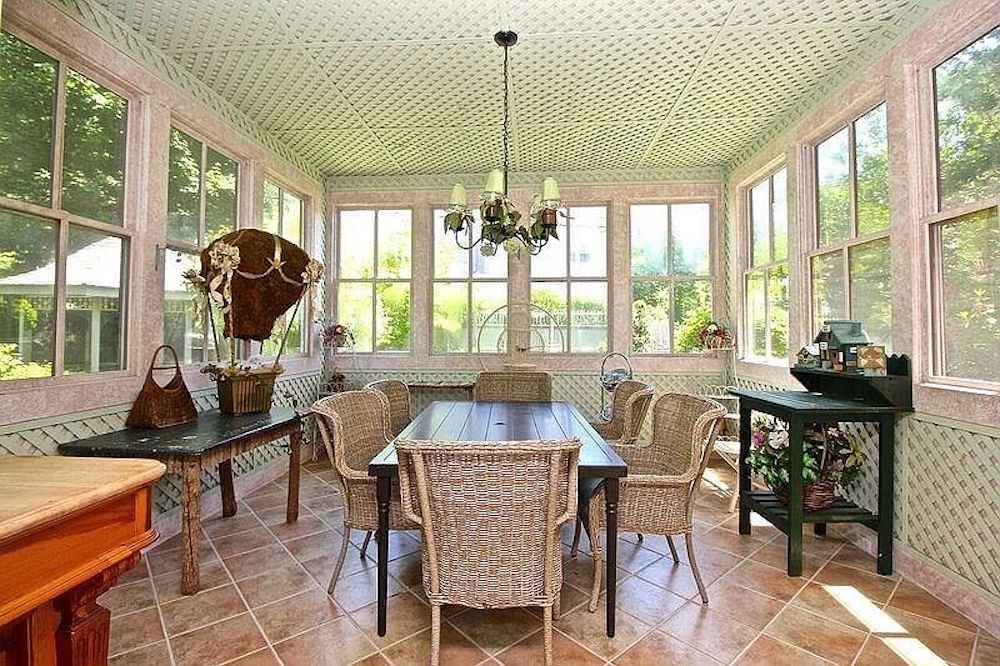 This five-bedroom, four-bath carriage house, also pictured top, was built in 1850, and is located in the center of Newport just a few blocks from Easton Beach. Highlights include a massive open concept kitchen with a center island and white cabinets; a covered porch with lots of windows, and a spiral staircase leading from the open living room to the bedrooms upstairs. There's also a deck off the master bedroom, and a lush yard with a gazebo. The house is priced at $799,000.

This two-bedroom, two-bath colonial has refinished hardwood floors, a gas stove, wood-accented walls, and a kitchen outfitted with stainless steel appliances and granite countertops. There's also a private yard with a large brick patio, and a small screened-in porch. The property is located in The Point, one of Newport's oldest neighborhoods, which is known for its colonial houses and proximity to the harbor. The house is priced at $695,000.

This six-bedroom, four-bath house, located close to Newport's historic Thames Street, can be broken up into three individual units, making it a great investment property or standalone house, if you've got a big family. Built in 1909, highlights include exposed brick, gas stoves, hardwood floors, and bay windows; there's also a private deck attached to the first floor unit. The property is priced at $750,000.

Newport's Ocean Drive neighborhood is where you'll find a lot of the big mansions, but you can also find some more affordable condos and houses here, as well. This three-bedroom, four-bath townhouse-style condo makes up three floors, and has high ceilings, three private decks, and lots of windows boasting harbor views. There's also a fireplace in the living area, and a small lofted space upstairs. The unit is priced at $860,000.

This two-bedroom, two-bath condo, built in 1906, is located close to the Cliff Walk and some of Newport's more grandiose mansions. The unit itself has some lovely old-world touches, like bay windows, wood trim, hardwood floors, and crown molding. Other highlights include fireplaces, wood window trim, a lush yard, and a handsome porch. The unit is priced at $665,000.

Beach 5 houses in Santa Barbara, CA, a city with deep Spanish roots and architecture
Suburbs 5 houses in Houston, Texas, where everything's bigger and a little cheaper
Beach 5 houses in Orlando, FL., where the economy and jobs are booming
Brick Underground articles occasionally include the expertise of, or information about, advertising partners when relevant to the story. We will never promote an advertiser's product without making the relationship clear to our readers.
topics:
history house outdoor space Price Check National Edition vacation vacation home
SHARE
TWEET
BRICK’S PICKS