Skip to main content
RECOMMENDED IN RENT
Moving to NYC after college? Here's how to do it Brick Underground's 2021 guide to co-living spaces in NYC: How to tell the communal disruptors apart The 7 best ways to find a short-term rental while you renovate your NYC apartment NYC apartment leases with major concessions are coming up for renewal. Here's how to negotiate 5 things you should know about renting month to month in NYC
RECOMMENDED IN BUY
How buying real estate in NYC is unlike anywhere else The most expensive neighborhoods in NYC: A buyer's guide for 2021 Buying for the first time in NYC? Be sure to prep your finances first 10 steps to creating a stellar co-op or condo board application
RECOMMENDED IN SELL
A guide to using a no-fee renovation loan from a NYC real estate firm How much does moving to the suburbs cost vs. staying in NYC? What's the best shade of white to paint your NYC apartment if you're trying to sell? Should you sell now or wait? NYC brokers and experts weigh in
RECOMMENDED IN IMPROVE
How to make your NYC renovation more pet-friendly Renovating or adding a kitchen island to your NYC apartment? Here's a checklist The 7 best ways to get your landlord to fix stuff in your apartment Want to use reclaimed materials and appliances for a renovation? Here's what you should know How to deal with flood or water damage in your NYC apartment
Condo pick of the week

A Clinton Hill two bedroom for $995,000, with private roof deck and low monthlies

Exposed brick adds character to the living room of this two-bedroom condo.

The price of this newly remodeled two-bedroom apartment, 162 Washington Ave. #4, in Clinton Hill came off by $90,000 about 11 weeks ago and is offered at $995,000. That's below the current median sales price of $1,212,000 for similar apartments in the neighborhood and it has plenty to recommend it, including a modern interior and a private roof deck.

The apartment is one of four in a converted townhouse, all in the same style. In a building this size, what you lack in amenities, you make up for with low monthlies. The building has a virtual doorman and some storage available. Common charges are $198 per month and monthly taxes are $212.

Many developers in NYC are having to get creative to offload apartments so they can move on to the next project. That means there are incentives being offered. This apartment was priced at $1,100,000 when it was originally offered last May. 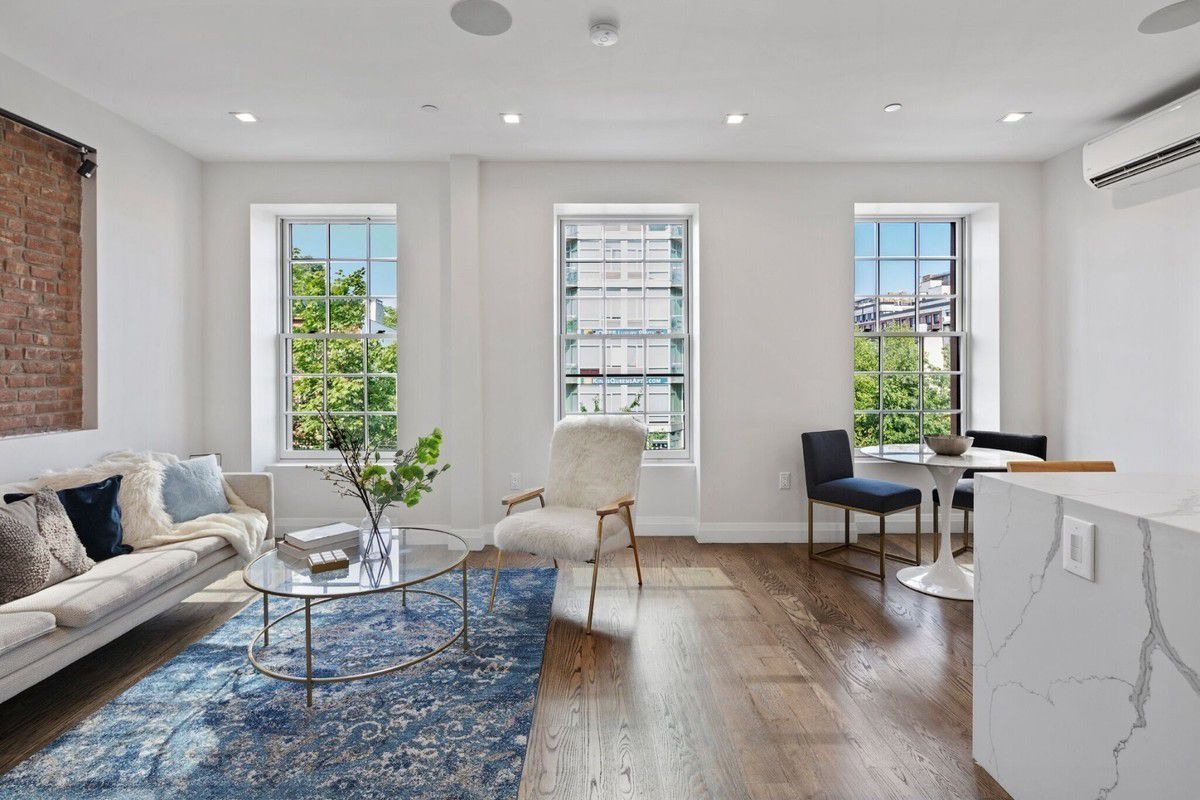 The apartment has hardwood flooring. The living room is open to the kitchen, has three windows, and a small dining alcove. A picture frame of exposed brick on one wall adds some character. 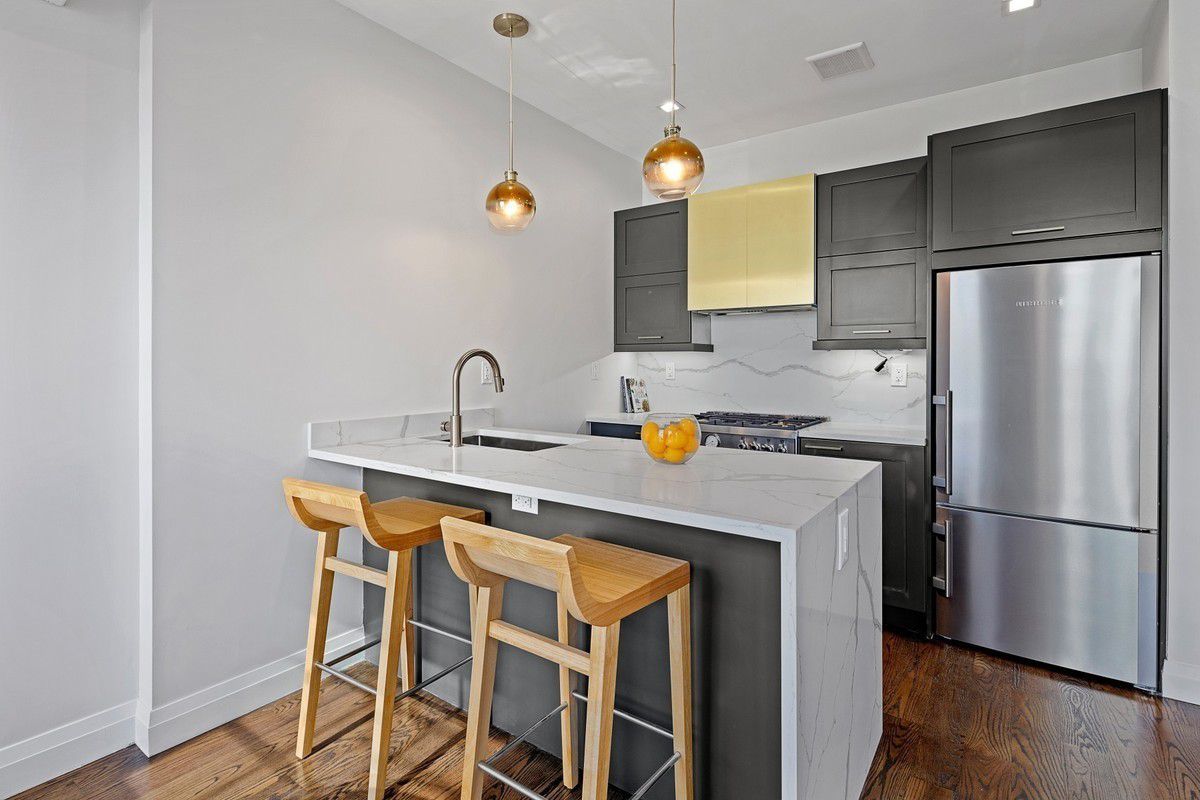 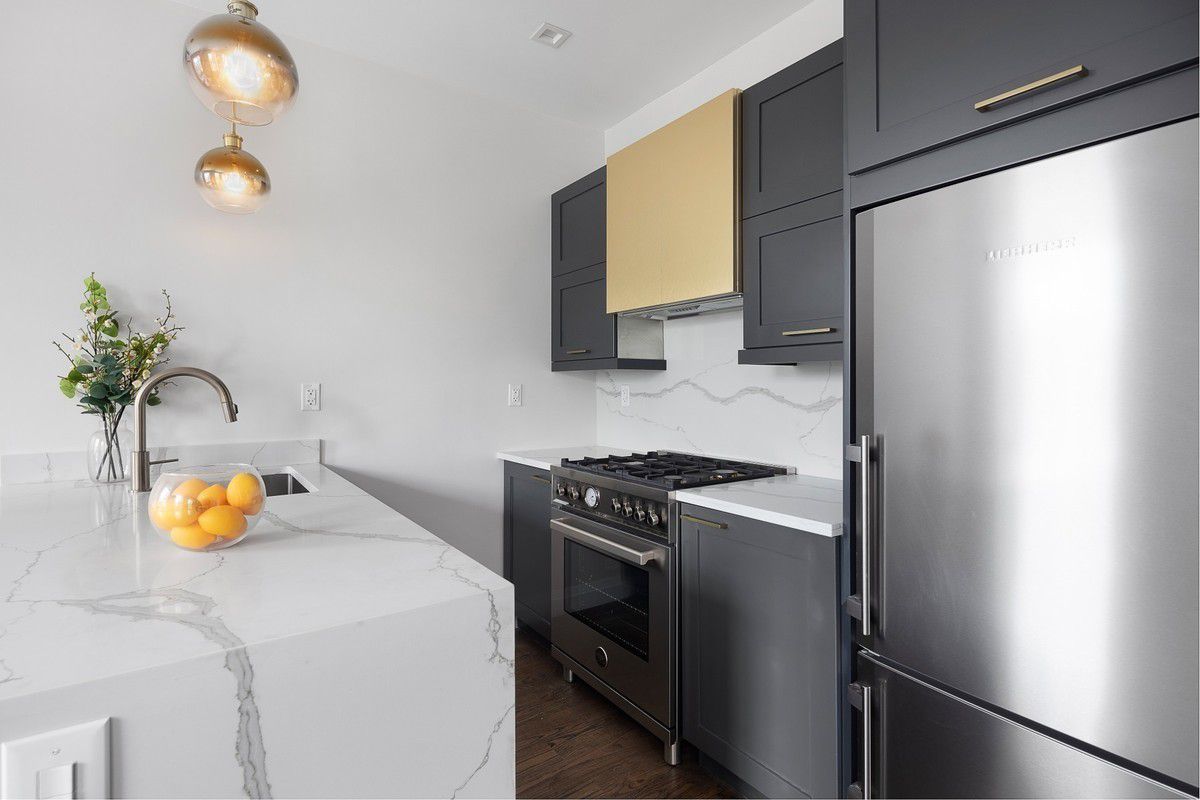 The kitchen isn't huge but has a waterfall stone countertop and backsplash plus European appliances like a Bertazzoni range and Liebherr refrigerator. 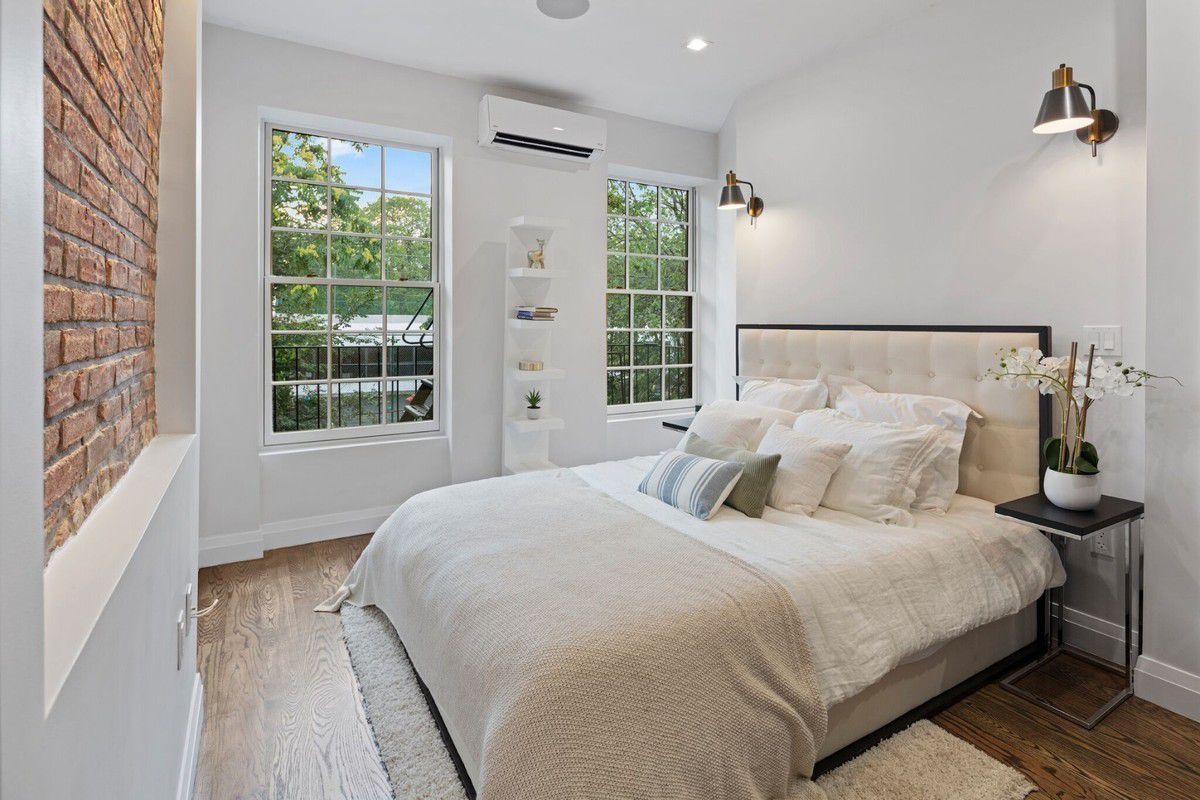 There's some more exposed brick in the master bedroom. Both bedrooms face southwest, which is one of the best orientations for natural light. 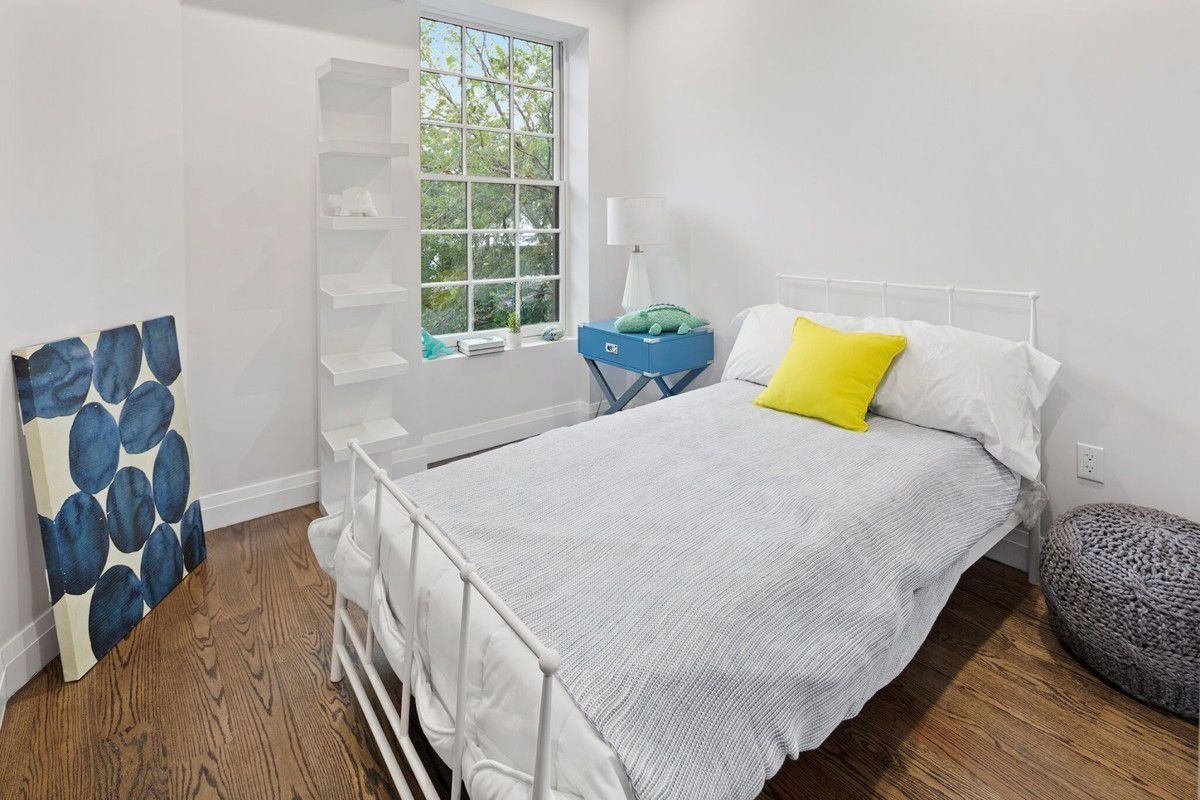 Both bedrooms have closet space and there's a washer/dryer in a closet near the second bedroom. 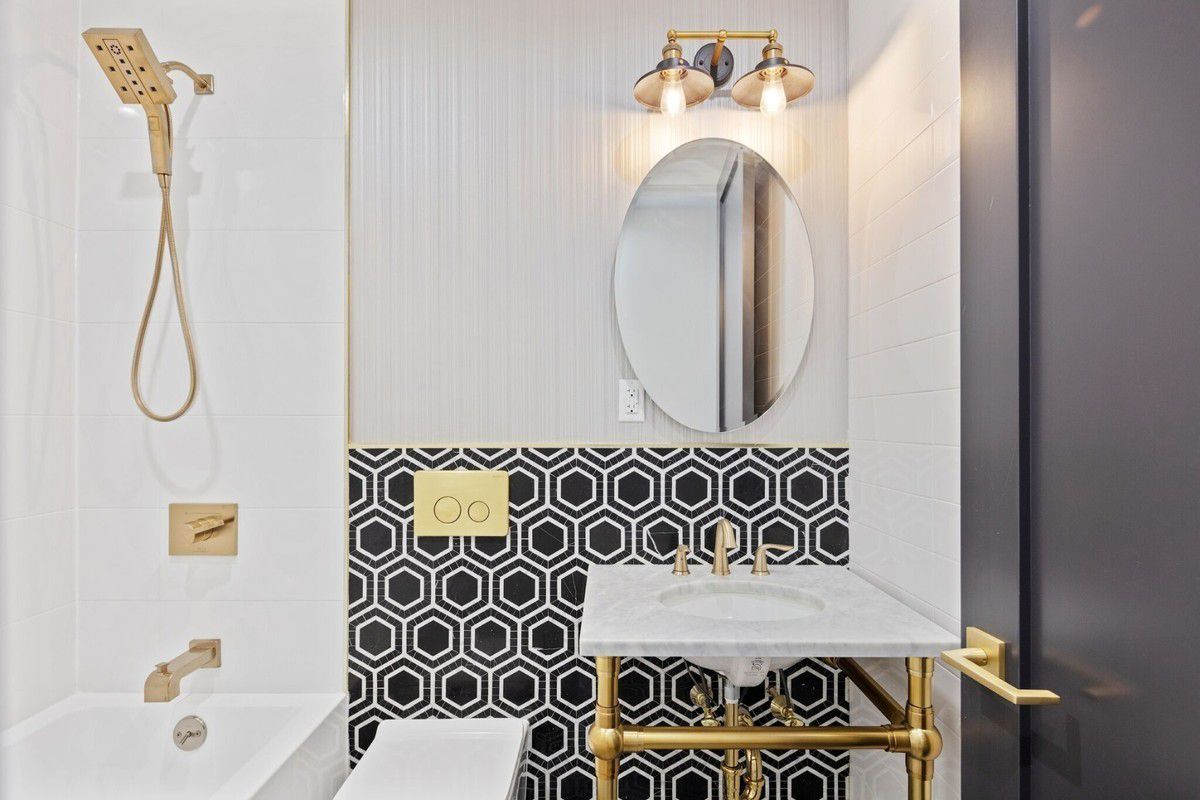 The bathrooms have bronze fixtures paired with modern hexagon tiles, which add some drama. The en suite bathroom has a shower stall. 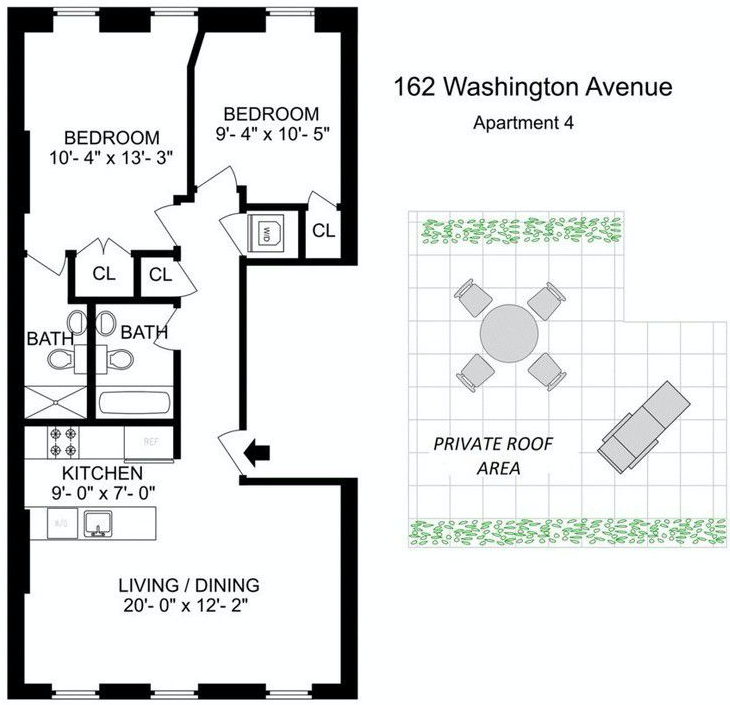 There are no pictures of the private roof area, which appears to be accessible from outside the apartment. For transportation, it's a short walk to the G train at Clinton-Washington Avs.

Sell How New Yorkers can take advantage of the city's oversupply of luxury condos
New Construction + Condos Buying a luxury condo in NYC? Some developers are offering extreme incentives
Improve Should you renovate or sell in a down market? Here are the questions to ask
Brick Underground articles occasionally include the expertise of, or information about, advertising partners when relevant to the story. We will never promote an advertiser's product without making the relationship clear to our readers.
topics:
Clinton Hill Condo pick of the week condos maintenance & common charges roof
SHARE
TWEET
BRICK’S PICKS