Skip to main content
RECOMMENDED IN RENT
Moving to NYC after college? Here's how to do it Brick Underground's 2021 guide to co-living spaces in NYC: How to tell the communal disruptors apart The 7 best ways to find a short-term rental while you renovate your NYC apartment NYC apartment leases with major concessions are coming up for renewal. Here's how to negotiate 5 things you should know about renting month to month in NYC
RECOMMENDED IN BUY
How buying real estate in NYC is unlike anywhere else The most expensive neighborhoods in NYC: A buyer's guide for 2021 Buying for the first time in NYC? Be sure to prep your finances first 10 steps to creating a stellar co-op or condo board application
RECOMMENDED IN SELL
A guide to using a no-fee renovation loan from a NYC real estate firm How much does moving to the suburbs cost vs. staying in NYC? What's the best shade of white to paint your NYC apartment if you're trying to sell? Should you sell now or wait? NYC brokers and experts weigh in
RECOMMENDED IN IMPROVE
How to make your NYC renovation more pet-friendly Renovating or adding a kitchen island to your NYC apartment? Here's a checklist The 7 best ways to get your landlord to fix stuff in your apartment Want to use reclaimed materials and appliances for a renovation? Here's what you should know How to deal with flood or water damage in your NYC apartment
Buy Curious

What's a 'classic six' apartment, and why are they so desirable?

Have you heard the term “classic six,” but don’t know what it means? It’s simple, really. A classic six is a six-room apartment in a prewar building with old-school features such as large rooms, high ceilings, wood floors, and solid-core doors. They’re mostly found on the Upper East and Upper West sides of Manhattan.

In this week’s Buy Curious, Marcy Pedas Sigler of Compass tells you more about this New York City listing term, plus describes the benefits and drawbacks of buying one.

[An earlier version of this post was previously published in August 2019. We are presenting it with updated information for August 2020.]

I’ve been looking at apartment listings, and I keep running into the phrase, classic six (and classic five, classic seven, and so on). What exactly does that mean, and why is it desirable? Will I pay more to live in one? Where are they located?

“This term refers to a prewar apartment with six rooms, generally including the kitchen and bedrooms, and excluding the bathrooms, pantries and entrance galleries,” Sigler says.

A classic six has a living room, a formal dining room with a window, a separate kitchen, two full bedrooms, and a maid's room that's usually located off the kitchen with its own full bathroom or half-bath.

A classic five lacks the maid's room, while a classic seven has an extra bedroom, and the rare classic eight has a room for a second maid.

If you're not seeing enough apartments for sale in your price range or target neighborhood—and/or you'd like to avoid a bidding war—consider expanding your search to "off-market" listings. NYC real estate brokerage Triplemint, a Brick Underground partner, uses technology to mine public records and identify owners who may be ready to sell, meaning you can meet and deal with owners before their homes hit the market. Click here to learn more.

Where should you look for them?

“You'll often find classic apartments in co-op buildings that date back to the 1920s through 1940, primarily on the Upper East Side and Upper West Side,” Sigler says.

But developers of new construction are incorporating this kind of detail into their projects.

“In recent years, developers of new condos like 520 Park Ave. in Lenox Hill and 220 Central Park South in Midtown have co-opted the classic layout, combining those old-school embellishments with modern extras like garages, gyms, pools  and screening rooms,” Sigler says. “So, if you're enamored of the prewar style, you don’t have to confine your search to decades-old buildings (or pass a co-op board).” 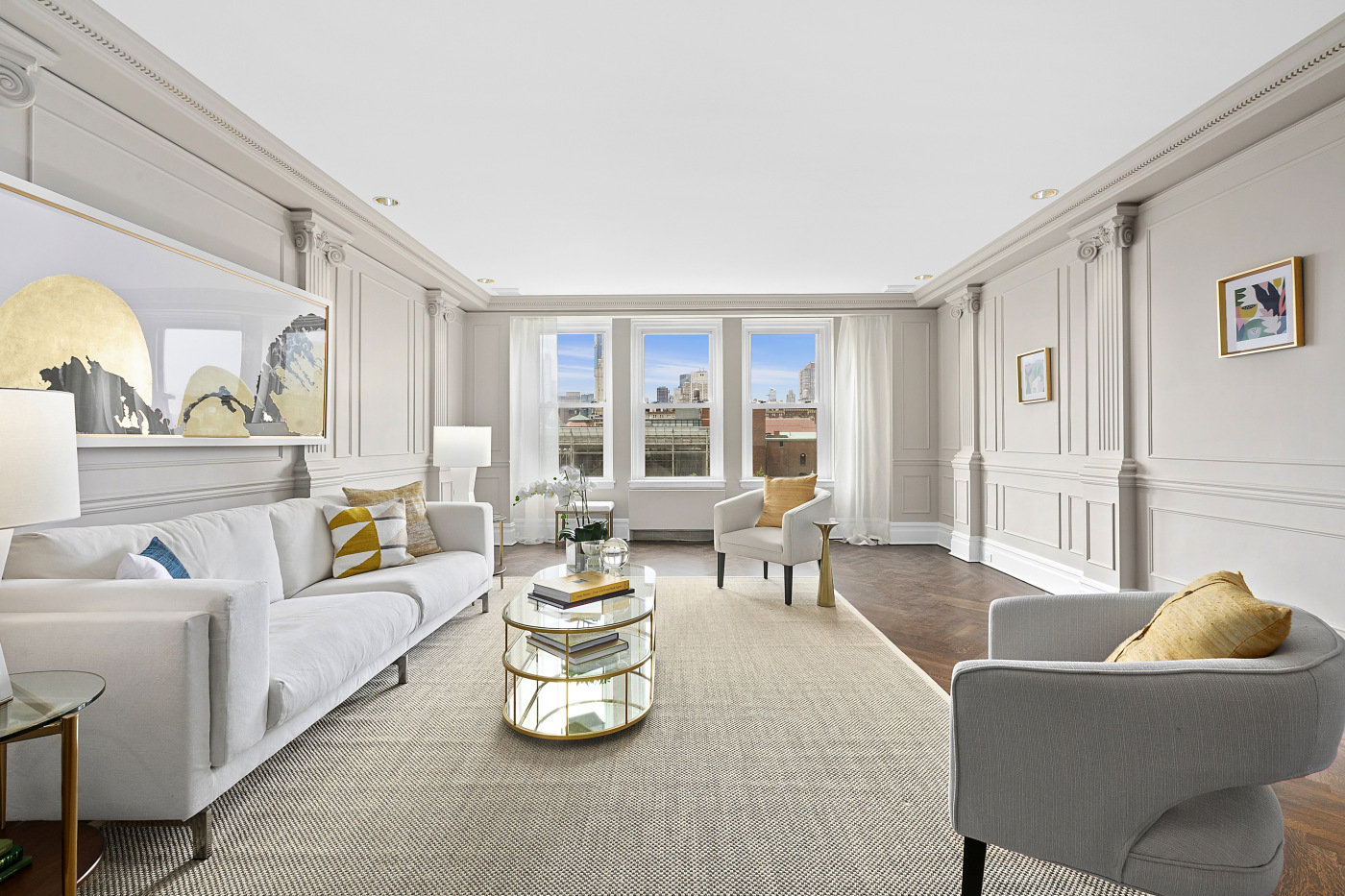 The classic six, 15 West 81st, #10D, has with views of the Museum of Natural History and Central Park.

How many classic sixes are for sale at the moment?

For comparison’s sake, according to the Compass Manhattan Market Report, the average sales price for a Manhattan condo in the second quarter of 2020 was $2,843,620 and for co-ops it was $1,230,103. (Sales prices tend to be lower than asking prices.)

Why would someone want to buy a classic six?

According to Sigler, pros of purchasing a classic six include high ceilings of at least nine feet, she says, as well as charming prewar details such as moldings and cornices.

Some people also like the fact that classic sixes have defined living areas. “The apartment is divided into three zones—public (living room, dining room, library), private (bedrooms), and servants’ quarters (including the kitchen),” Sigler says, noting that hallways help to separate the spaces.

Looking for the perfect class-six, but haven't seen one yet? Discover off-market properties in your dream neighborhood that suit your needs and budget.  Meet and deal with sellers before their apartment hits the market.

Why wouldn’t someone want to buy one?

Some people prefer more flexible layouts. “The lack of an open layout could be a downside if you have small children that you want to keep an eye on,” Sigler says.

Finally, while a maid’s room might have been all the rage back in the day, it’s now more likely to be an annoyingly-small closet-sized bedroom. The space can often work well as an office or a guest room, Sigler points out.

Co-ops Prewar, post-war, or new construction—what’s the difference between these types of NYC buildings?
The Market Ask these questions before you buy a co-op or condo in NYC
Co-ops 11 tough co-op board interview questions—and how to answer them
Brick Underground articles occasionally include the expertise of, or information about, advertising partners when relevant to the story. We will never promote an advertiser's product without making the relationship clear to our readers.
topics:
bedroom Buy Curious buying ceilings co-ops condos layouts prewar
SHARE
TWEET
BRICK’S PICKS

Looking for off-campus housing in NYC? Here’s what you need to know
THE BU PODCAST