Read your mail carefully: A new "vermin control" scam is making the rounds in NYC

Scams in New York are about as common as vermin, and now, an unfortunate (but inevitable) marriage of the two: a new fraudster in town is sending out phony notices to city homeowners claiming unspecified "vermin control" violations, and demanding that payment be sent immediately to an address in Whitestone.

The ruse first surfaced on Reddit, where a user posted the below photo, asking, "Has anyone else received this? It seems fake to me." 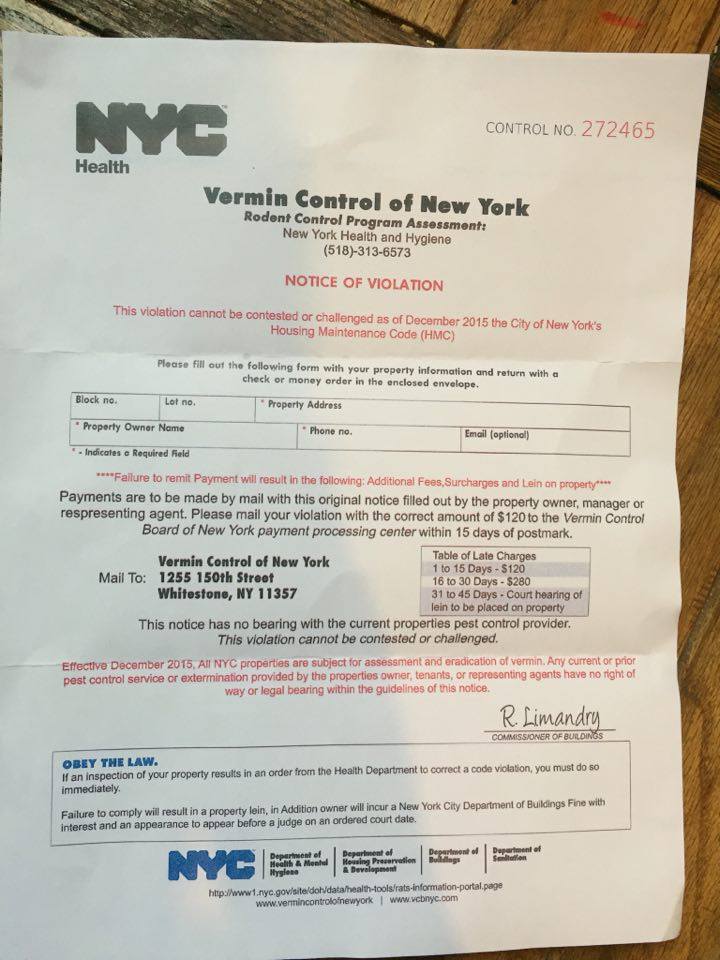 Users on the site were quick to point out that the letter is indeed a fake (plus, we note, riddled with grammatical errors, which are a tell with scams), and not only that, it purports to be sent by the "NYC Department of Health," which doesn't technically exist—it's the Department of Health and Mental Hygiene.

As Gothamist points out, the letter also features a forged signature from the former Commissioner of Buildings, and there doesn't seem to be any organization called "Vermin Control of New York" listed for the address given in the letter. So, all in all, highly suspicious.

For further clarification, Assistant HMH Commissioner Mario Merlino has since issued a statement, saying, "New Yorkers should know that the Health Department never issues a notice of violation demanding immediate payment. A notice of violation cannot result in a fine or penalty without there being an opportunity to contest it in a hearing. Further, the Health Department never requests that it, or its programs, be paid directly for violations it issues."

As usual, if you get a letter in the mail demanding money (and purporting to come from an official city or state agency), it's wise to do a little Googling—and make a few phone calls—before assuming the request is legit.

The Paranoid New Yorker's Guide to Googling Your Neighborhood

Autumn in New York: time to worry about rodent prevention

Don't fall for any of these real estate scams

pests scams
Brick Underground articles occasionally include the expertise of, or information about, advertising partners when relevant to the story. We will never promote an advertiser's product without making the relationship clear to our readers.
Share:

Can you back out of a contract to buy because of coronavirus—and keep your deposit? It depends

How to move to NYC: A crash course to finding an apartment—even in a pandemic

Buying a new development condo? Ask these questions to get your money's worth

Rent guarantee insurance pays your landlord if you lose your job. Is it a good deal?