I’ve lived in the same building in the East Village since 1990. My current apartment is a two-bedroom with a working fireplace, exposed brick walls, and over 750 square feet of space. Before you jump ahead and start throwing shade, note that I’m not rent controlled or stabilized and my rent is a whopping $3,150 a month.

Plus, if you were to put a pea on one end of our kitchen counter it literally rolls to the other side, unassisted. The kitchen constantly omits a faint smell of gas and mustiness created by the perpetual leak coming through the wall that was literally fixed with duct tape a few months ago. (There is no gas leak as we did have that checked, but who really knows?) 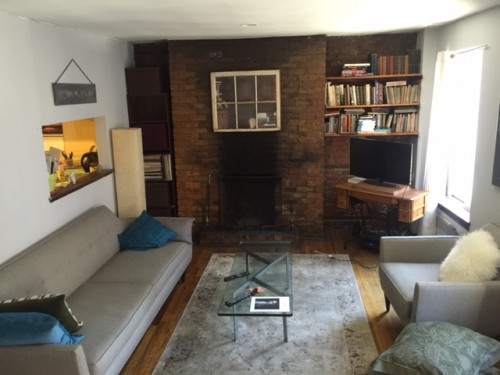 Oh, and my landlord is a very shady individual who’s entirely unwilling to make any improvements. That said, I’m here to stay, and here’s why.

How I got here

I moved into an $850 two-bedroom on the ground floor of my building in 1990, as a sophomore at NYU—so you can say I kind of grew up in this neighborhood. I paid the rent in the basement of a laundromat next to chained up guard dogs (Dobermans, I think?) under portraits of the Pope and Frank Sinatra. My “lease” was scribbled on a yellow legal pad and was far from professionally written.

(Fun sidenote: I found the apartment, one of five units in a townhouse on a centrally located East Village side street, through my roommate’s father. He often picked us up from our class at NYU in a limo. Every time I saw him, he was driving a different car. When I asked my roommate what line of work he was in, she'd simply say, “Construction.” Apparently he knew the landlord and he was a "business acquaintance" who owed him a "favor.")

Things have changed significantly since I first moved in. For instance, I used to call the junkie who shot up on my stairs our “doorman,” and now I can barely afford to shop at Duo and Meg, two wonderful boutiques on my block. Even with the neighborhood layaway discounts they give me, it’s still a choice between a pair of new shoes or all my bills plus a week’s worth of food.

Unsure of my status

I’ve moved around within the building, but mostly been here since 1990. I had to move up a flight when the landlord wanted to move into that apartment, so the lease was broken at that time. Then I had to go to Los Angeles for work and my roommate took over the second apartment’s lease for a stint. During this time, the landlord asked her to move up a flight because he was moving in another family member.

So even though I’ve “been here” since 1990, in legal-speak, I’m not sure “on and off,” counts. According to New York law, after the rent on a stabilized apartment reaches $2,500, it can legally fetch market rate once it is vacated. And when that happened, I had moved out and my roommate put her name on the lease.

Nonetheless, I contacted the city’s Division of Housing and Community Renewal a few times to make sure we’re not still somehow regulated. The law states that, generally, apartments in buildings of six or more units built between February 1, 1947 and January 1, 1974, which were priced below $2,000 before 2011 or below $2,700 today, are stabilized.

But thanks to a little digging I also found out the landlord hasn’t registered this building with the DHCR since 1989, and the rent prices found on their list don’t jibe with my memory of what we paid in 1990. In reality, I think it fell within all the guidelines back then.

According to the Rent Guidelines Board of New York City, “… the landlord may be required to provide you with a notice of deregulation, including the amount of the last regulated rent and a copy of rent registration filed with the NYS Division of Housing and Community Renewal (DHCR)."

It's all rather curious. But not curious enough to file a complaint and cause an investigation and the subsequent ruckus that might ensue with said landlord.

Lots of life has happened since I moved in, and many roommates have come in and out.  I’m now engaged, but I still can't afford my apartment without a roommate. My fiancé and I are both artists, and we have a roommate living with us too in order to help cover our rent.

There are leaks coming through the walls—as well as one in the bathroom ceiling—window panes falling out into the street and oh yeah: mice. Lots of mice. But I can't ask for anything to be fixed, as my landlord threatens to raise my rent exponentially every time I do. We do it all ourselves, or we pay for a handyman to come in. A couple of months ago when I was cleaning the second bedroom, preparing for yet another roommate to move in, a pane of glass fell from the decaying wood window frame. I emailed my landlord to ask if my fiancé and I could pay to replace the windows in that room, as it’s the only room he did not replace the windows in about six years ago. Why? Who knows?

I got an email back saying, “That’s not how it works. New windows = rent goes up.”

Indeed, when those other windows were replaced, my rent went up by $500. According to my calculations, I’ve paid for those windows about 50 times over. Meanwhile the woman who rents the top floor totally renovated the roof, built a deck, doesn’t let anyone up there and is also “rescuing pigeons.” Her rent is somehow under one thousand dollars. How? Who knows?

Oh and the most recent development: My landlord is now saying my lease has been expired for a year due to a clerical error and he is now raising my rent $50 more mid-year.

Whenever I whine that I want to move and escape my shady landlord and less-than-Pinterest-worthy-apartment, my fiancé reminds me of our square footage and working fireplace. 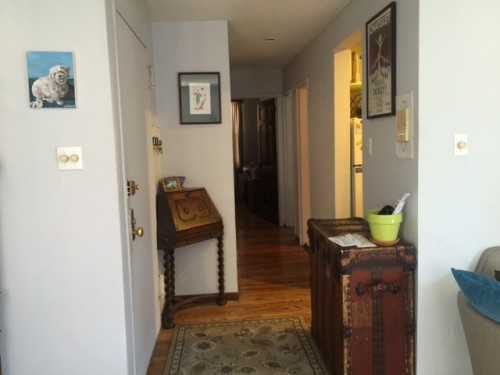 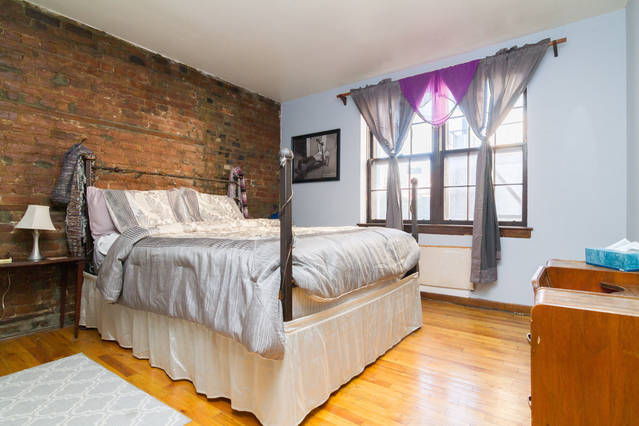 Recently my fiancé and I found out a middle-income apartment lottery in Stuyvesant Town is going to process our application. If we do get an apartment there, it would be a one bedroom a little smaller than what we have now.

But it's not just the smaller size that's keeping me away. It's also the fact that it's not on this magical block, filled with people I’ve known for half my life. The tree-lined streets, the little white lights that hang from the local stores in the winter (see photo below), the stoops with people chatting and drinking coffee from Mud. I am truly conflicted about leaving here—even with the huge water bugs and broken windows, it’s my home. 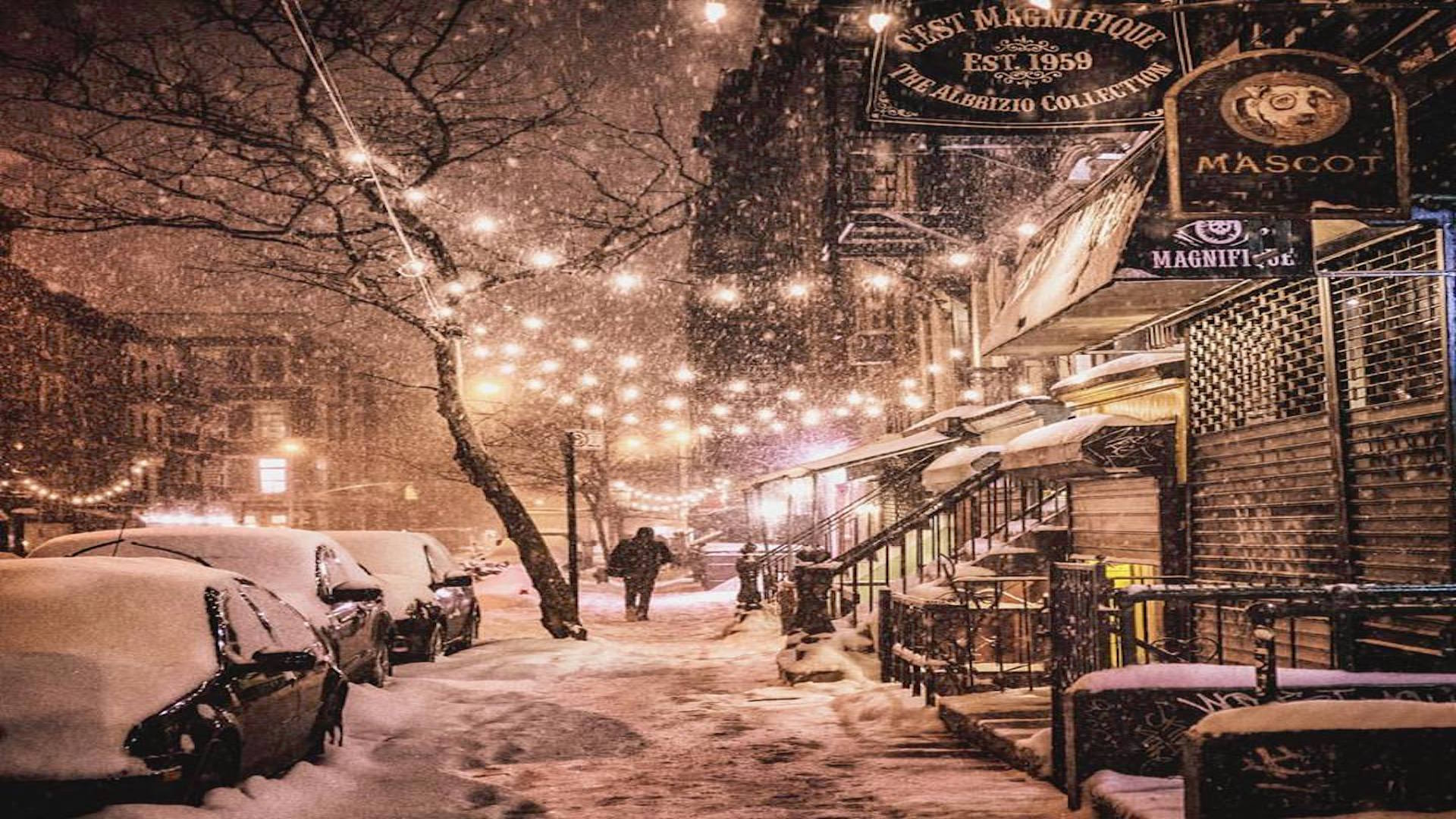 Someone once called my block "Sesame Street." I can see why: its’ tree lined, has adorable shops and the people look out for one another. I even received multiple condolence cards from shop owners when my beloved dog of 16 years passed away. Maybe that’s why people, myself included, are willing to pay so much to live here.

For now, I’ll enjoy the leaks and the cracks because as Leonard Cohen said, “There is a crack in everything, that’s how the light gets in.”

Then & Now: My East Village apartment still fits, but the neighborhood doesn't

rent Then & Now
Brick Underground articles occasionally include the expertise of, or information about, advertising partners when relevant to the story. We will never promote an advertiser's product without making the relationship clear to our readers.
Share:

From the UES to Southampton: Leaving a luxury rental for a condo near the beach

Renters ask: What happened to landlords' promises to 'work things out'?