Would you rent this weird two bedroom in the East Village for $3,100 a month?

The hall and top of the stairs doubles as an office and living room... ish.

What East Village apartments lack in space and subway access they make up by being in the East Village. Or something like that. It can't hurt that you can walk from the East Village to New York University and it's a short bike or bus ride from Midtown and the Financial District, but the draw of the neighborhood has long been the neighborhood itself. Once a destination for punks, activists, and artists, it's still infused with some of their (aging) spirit, and home to an archipelago of bars and their complement: places to eat for cheap that are open late.

This two bedroom is typical of the East Village apartment form: tiny, expensive, and weirdly laid out. We only see one of the two bedrooms and one of the one and a half bathrooms, but the listing shows that it's a duplex, with a futon and a desk jammed into the stair landing, a kitchenette with comically small drawers, and a checkerboard-tiled, windowless bathroom. It's listed for $3,100 a month, and it comes with access to a roof deck.

So is the apartment worth it?

As always when analyzing New York City apartment listings, we turn to our Take It Or Leave It experts: myself, Constantine Valhouli, founder of real estate research and analytics firm NeighborhoodX, and freelance writer Lambeth Hochwald.

First, though, here are some more photos of the apartment. 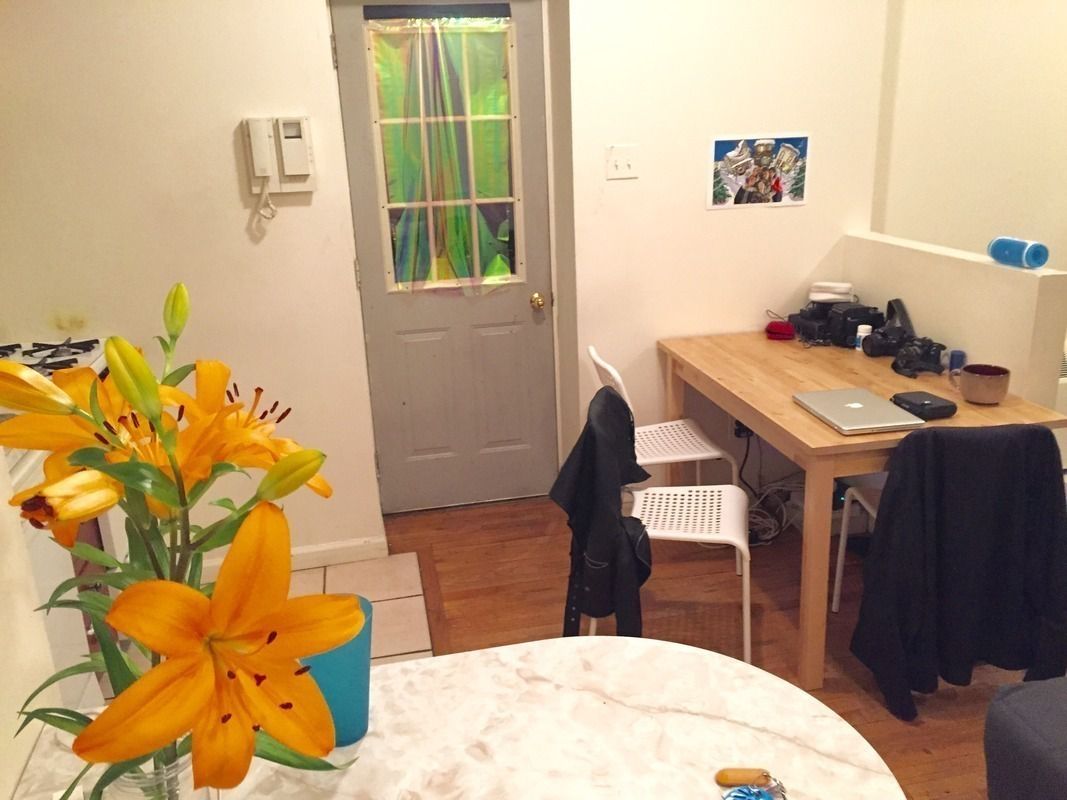 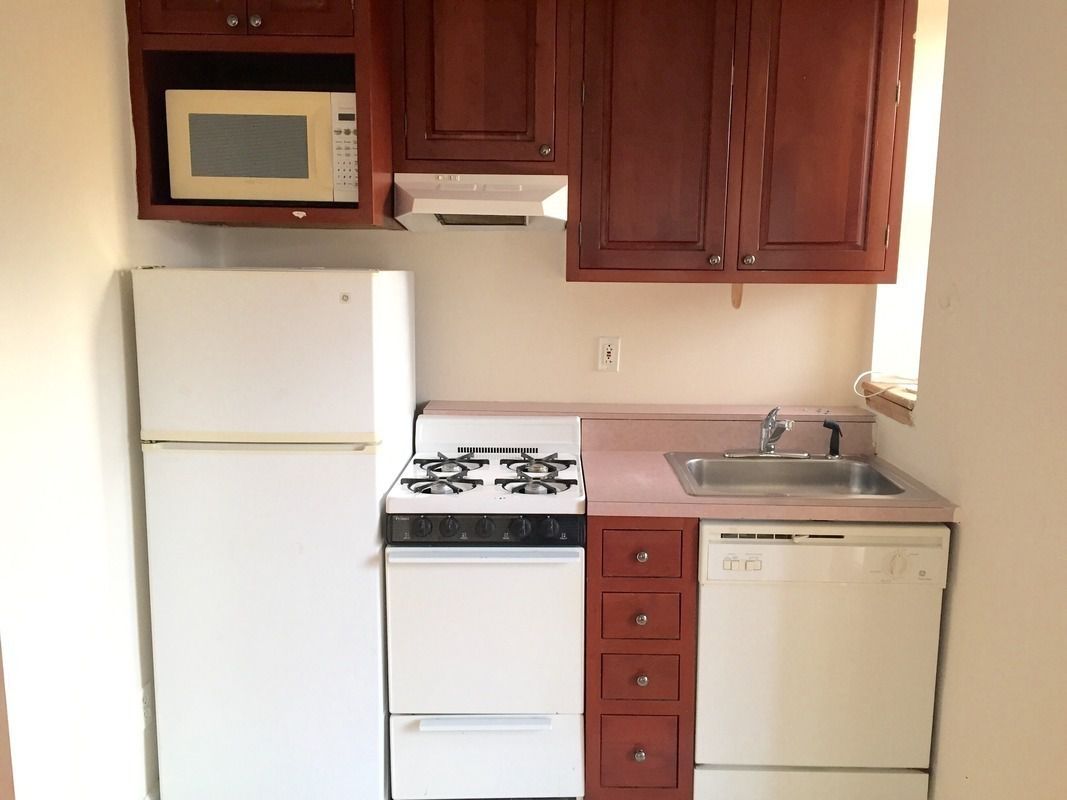 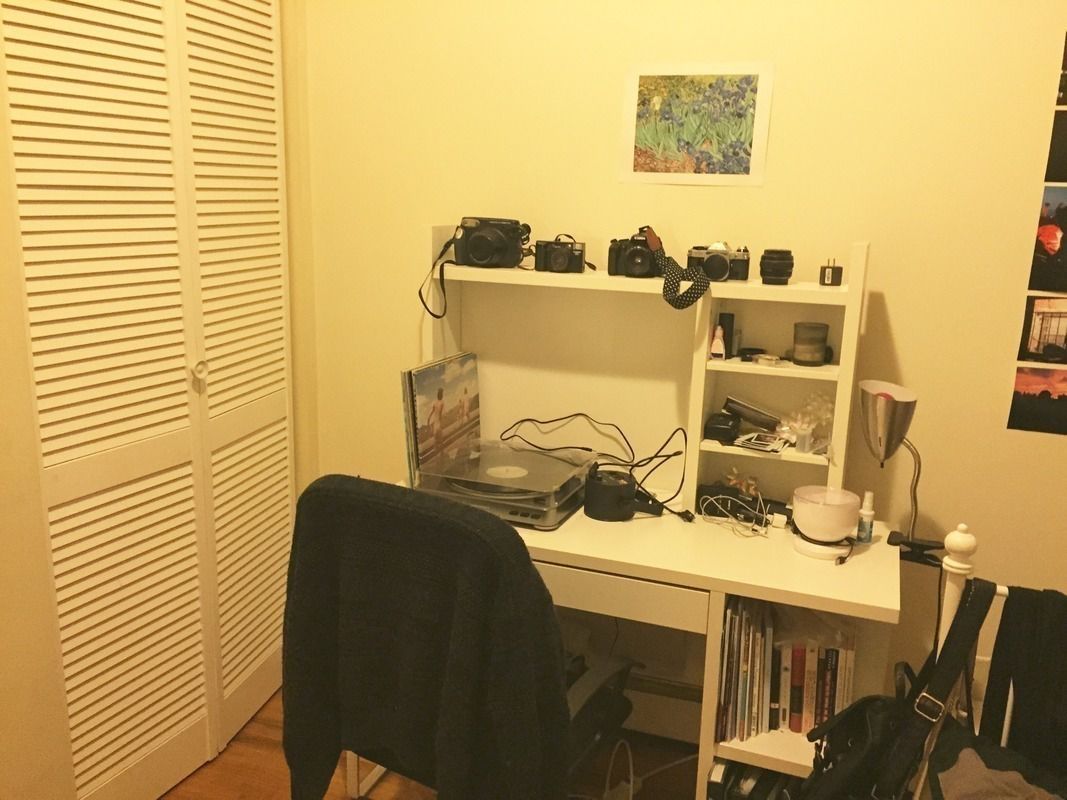 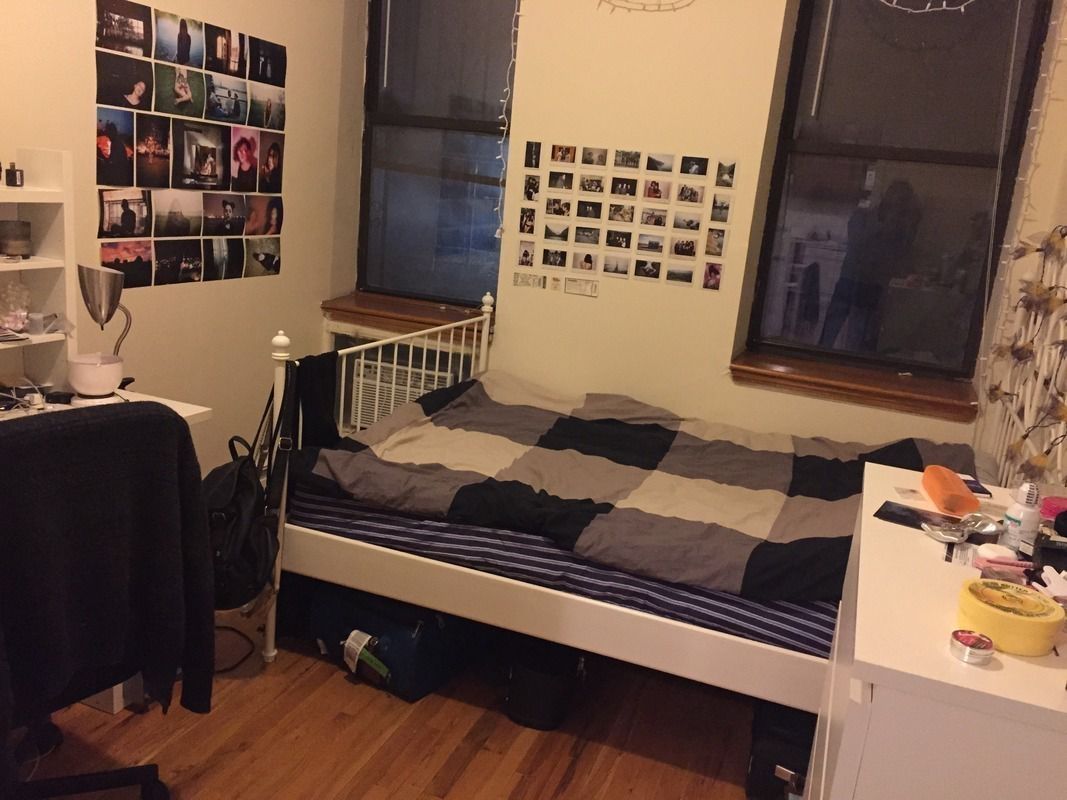 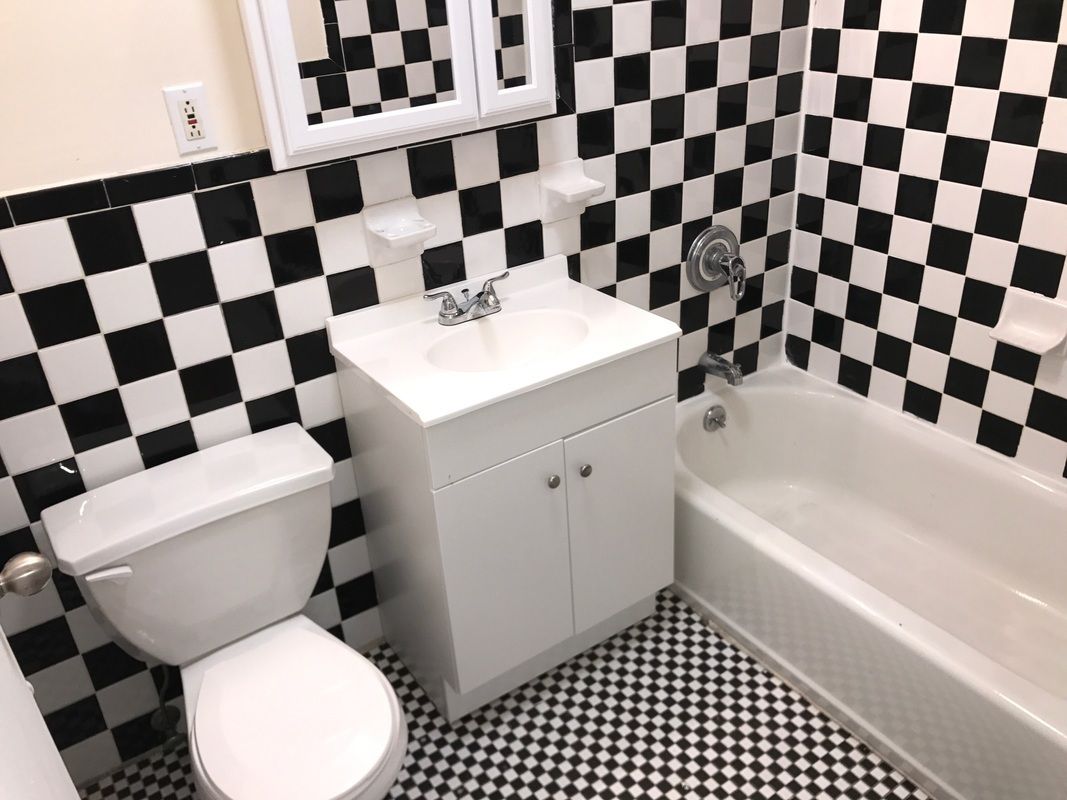 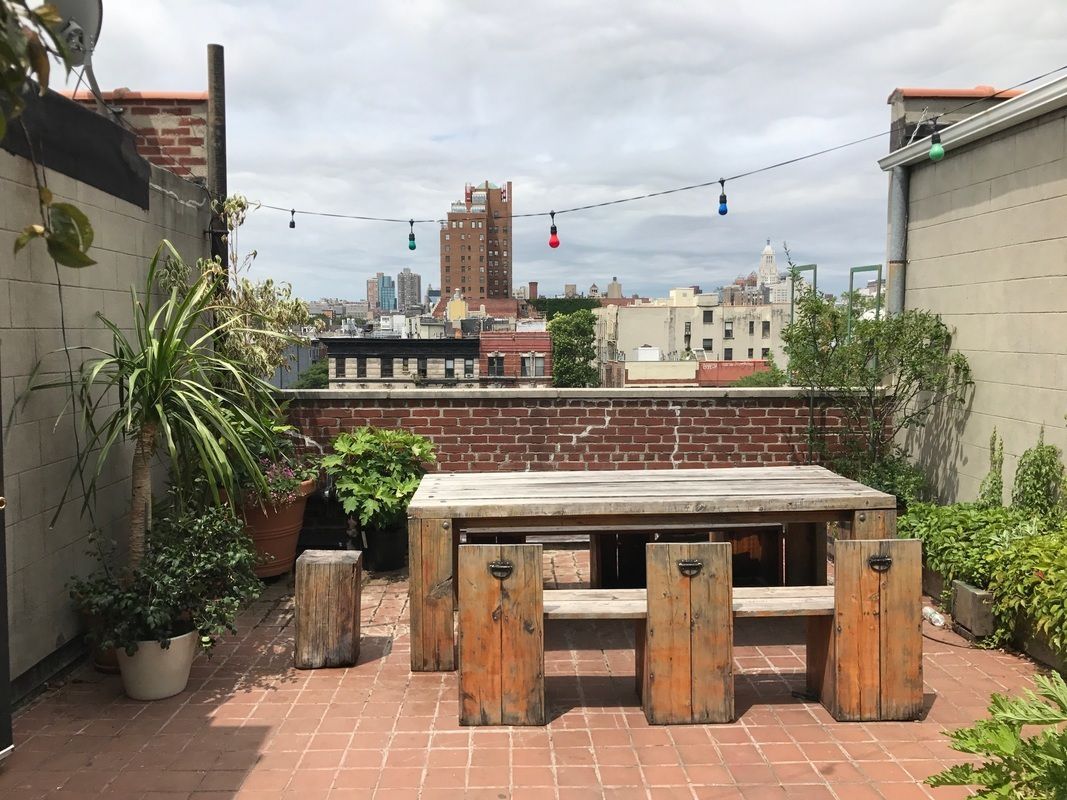 "It's small, pricey, and near Avenue C, which is great if you like the East Village, but not so great if you're relying on the subway to get anywhere. Lord knows what the floor plan and other rooms look like, but judging by the number, 1C, this apartment is close to the ground. On the bright side, the apartment is $400 below what StreetEasy says is the median rent for a two-bedroom in the neighborhood. Also, there's laundry in the building, and it's next to a community garden."—Nathan Tempey

"Pros: M.C. Escher seems to have tiled that bathroom, and I may now have that photo as a screensaver. Also, it's the East Village, arguably the liveliest food, nightlife, and entertainment district of Manhattan. Cons: This is likely in the area that flooded during Hurricane Sandy. And it seems like a first floor duplex, likely going below grade. So, there is a measured risk one should be aware of here."—Constnatine Valhouli

" As wackadoo as this apartment is—I've seen bigger kitchens in airplanes, and the bathroom feels like it's right out of Alice in Wonderland—there's also a lot about it that's quaint."—Lambeth Hochwald

Who it's perfect for

"Students or recent college grads with high-paying jobs or mommy and daddy's money who want to be in the neighborhood and don't care much about domestic comfort."—Nathan

"A couple who plan to do very little cooking but will take their takeout coffee from Ninth Street Espresso and sip it in the building's outdoor space."—Lambeth

LEAVE IT. "Save your money, unless it's worth it to you to have the world's shortest bike commute."—Nathan

TAKE IT. "But get flood insurance. And enjoy staggering home from your favorite bars. What you're paying extra in rent to live downtown you will save on end-of-night Lyft rides."—Constantine

LEAVE IT. "I just can't justify the price for this micro apartment so far from the center of town. It's far closer to the FDR than the subway."—Lambeth

Would you rent this Upper West Side 'MICRO STUDIO' for $1,000 a month?

20 questions to ask a potential roommate, a little-known NYC street and more of this week's most popular stories

East Village Take It Or Leave It
Brick Underground articles occasionally include the expertise of, or information about, advertising partners when relevant to the story. We will never promote an advertiser's product without making the relationship clear to our readers.
Share:

I fell in love with my Kensington co-op 15 years ago; now, I can't wait to leave

Do I have to pay a broker's fee if I found the apartment?

Can you still make money flipping an apartment in NYC?

A renovated Harlem townhouse with lots of historic detail, for $9,900,000

Furnish your space like the Elle Decor showcase home in Tribeca