Room prices are rising faster in Queens than any other borough, says new report

It's no secret that as a somewhat lower-priced alternative to Brooklyn, Queens real estate prices have been on a rapid rise for the past few years. And a new report from roommate-matching site SpareRoom would seem to confirm the trend.

According to data the site gathered from the fourth quarter of 2016, the average cost of renting a room in Queens rose 5 percent year-over-year, the largest increase of any borough. "It's not necessarily a huge surprise, but it's definitely interesting to see Queens continue its rise," SpareRoom's Matt Hutchinson tells us. "You've seen Queens become more popular as Manhattan slows down a bit, and parts of Brooklyn and Queens even start to match up with it.

And, he adds, "I think people are just maxed out."

The numbers are based on the prices of rooms advertised through the site, and indicate that the average monthly room rent in Manhattan is $1,535; in Brooklyn, $1,087; in Queens, $976; in the Bronx, $822; and in Staten Island, $736. And while most of the city's most expensive neighborhoods are in Manhattan (and all of them below Midtown), Williamsburg made the list in Brooklyn, as did Flushing and Long Island City in Queens. You can check out the full list of priciest neighborhoods below: 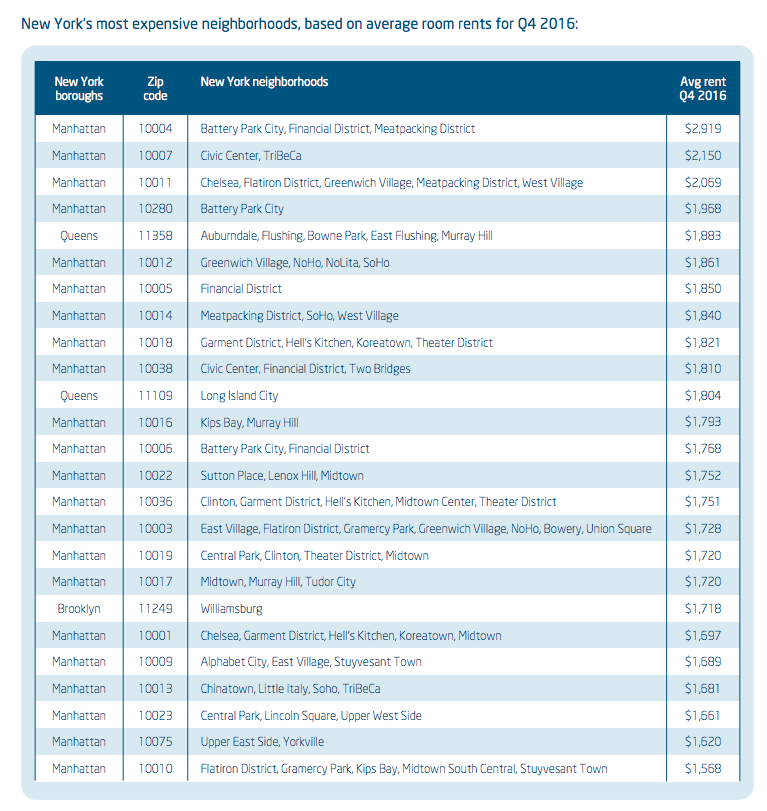 You can also see a chart comparing the yearly change in rents in each borough:

One interesting thing to note here: While prices have gone up in Queens and the Bronx as renters seek affordable options outside of Manhattan and Brooklyn, proportionally, there aren't many more renters looking in these areas on SpareRoom—yet. "The breakdown hasn't really changed much from last year," says Hutchinson. "Manhattan is around 40 percent of the market, Brooklyn is around 44 percent, Queens is around 11 percent, the Bronx is about 4 percent, and Staten Island scrapes by at less than 1 percent."

However, says Hutchinson, "I think that's going to change as people realize that the average rent in the Bronx is about half of what it is in Manhattan."

It's encouraging that there are still relative deals to be found in the outerboroughs, but also, feel free to weep for the days when any of these single-room prices would have netted you a nice studio all to yourself.

For new renters, New York might be more affordable than it seems

The latest reports reveal strong markets in the outer-boroughs, including a first look at Riverdale

The 12 best websites for finding a roommate in NYC

market reports Queens rents roommates
Brick Underground articles occasionally include the expertise of, or information about, advertising partners when relevant to the story. We will never promote an advertiser's product without making the relationship clear to our readers.
Share:

How to price your NYC apartment in a buyer’s market

Want to sublet your NYC apartment during coronavirus? Here's what you should know

My neighbor's deck is causing a leak in our apartment. No one can agree who is responsible. What happens next?