There comes a point in every New York City family's life when they consider escaping to the suburbs, often employing spreadsheets to figure out the price and budget differences between staying in the city and moving to the myriad towns nearby. (If this sounds interestingly specific, let's just say this scenario is a familiar one for this writer.)

Usually, the decision comes down to things like train commute versus subway commute, two cars versus zero to one car, real estate taxes versus high rents, and the like. But a new study from Care.com and Zillow, has found that the financial difference between staying in New York City and moving to the New York City suburbs is hugely in favor of the burbs: It costs a family of four on average $71,237 more per year to live in the city (that's nearly $6,000 more per month).

That staggering number is much more than the rest of the country's urban-vs.-suburban discrepancy, which finds urban centers $9,073 more expensive annually overall. 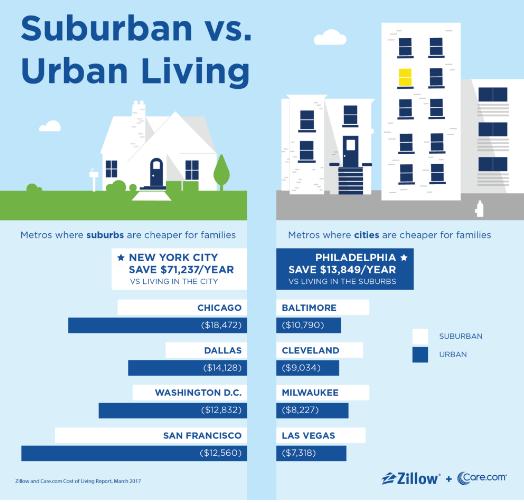 In famously expensive San Francisco, city families pay just $12,560 more per year than their suburban counterparts to live amid an urban backdrop.

In some U.S. cities, of course, it actually costs less for families to live in the metro area. In Philadelphia, for example, families save $13,849 a year as compared to their suburban counterparts.

Property costs are a big part of the equation. Nationally, the median property taxes and mortgage payments on an urban home totals more than $22,000 a year, according to Zillow, which is $7,000 more than median homeowners would spend on a suburban home.

The reason the New York City numbers are so high is because of both high housing costs and high childcare costs in the five boroughs.

But we find some fault with the study, and it's not just because we're trying to convince ourselves that we're making the right decision to stay in the city with our families. It's nearly impossible to make a one-size-fits-all analysis: Certain suburbs are incredibly expensive, with high taxes to boot (cough, Scarsdale), and some city neighborhoods, especially in the outer boroughs, are real bargains compared to that. Some people argue that the suburbs are cheaper because parents can send their kids to public schools instead of private schools, but plenty of us urban parents send our kids to public schools here in the city.

And while child care is likely pricier on a cost-per-hour basis, when you live and work in the city, your commute time is likely less and, therefore, you need less time covered by child care. (That said, we have found that services like day care, after school activities, and summer camps are significantly less expensive outside NYC.)

If we had to guess, we'd say the cost of raising kids is high anywhere in the New York City metro area, and that it all depends on how you choose to spend your money. If you really want to save money, we'd imagine you have to expand your suburban home search outside the immediate vicinity.

One thing that's hard to deny is that our suburban counterparts, and their kids, have a lot more space to run around than we do. If that's the most important thing to you, the suburbs-versus-city debate is likely a no-brainer. If not, though, it might be time to break out the excel spreadsheets. Just don't expect a clear winner.

Raising chickens in NYC: what you need to know

family suburbs
Brick Underground articles occasionally include the expertise of, or information about, advertising partners when relevant to the story. We will never promote an advertiser's product without making the relationship clear to our readers.
Share:

My co-op has a Local Law 11 violation. Now what?

How to kick out your roommate

Selling in a buyer's market? Then you should already be in Triplemint's Pre-Market Program

My roommates and I are going to study abroad. What happens to our apartment?

Controversial landlord has to pay $3M, house made of 21 shipping containers for sale, & more