What does it mean to live in one of the city's fastest-gentrifying neighborhoods?

It should come as news to approximately no one that large swaths of New York City are gentrifying at a rapid clip, seeing prices steadily tick upwards as affluent new residents set up shop in neighborhoods they might not have considered, say, ten years before.

But the term "gentrification" can be used as a catch-all that means anything from "my rent went up!" to "someone I don't liked moved onto my block!" For a more nuanced look, NYU's Furman Center has just released a huge new report on all things gentrification, identifying, among other things, NYC neighborhoods that are gentrifying most notably, as well as others where change seems to be coming more slowly.

Unsurprisingly, areas such as Williamsburg/Greenpoint, Central Harlem, Bushwick, and Bed-Stuy were all named among the city's gentrifying areas, as were less obvious choices like Brownsville/Ocean Hill in Brooklyn, and up in the Bronx, Mott Haven/Hunts Point and Morrisania/Belmont. The study also identified neighborhoods that were simply "higher-income" (e.g. already very expensive, as opposed to experiencing rapid growth), and some that are currently "non-gentrifying." (For the purposes of the this study, the Furman Center identified gentrifying neighborhoods as areas that "were low income in 1990 and experienced rent growth above the median [sub-borough area] rent growth between 1990 and 2010-2014," while the "non-gentrifying" neighborhoods have had more modest growth.)

Interestingly, the latter group included East New York, which has been something of a lightning rod for the city's ongoing debates over gentrification in recent months. Another surprising stat: The city's gentrifying neighborhoods still haven't fully recovered the amount of population they lost during the mass exodus of residents that took place in the 1970s and 1980s. "Despite the population growth in gentrifying neighborhoods, their aggregate population was still 15.8 percent lower in 2010 than it had been in 1970," writes the Furman Center.

The full lists for each category are below: 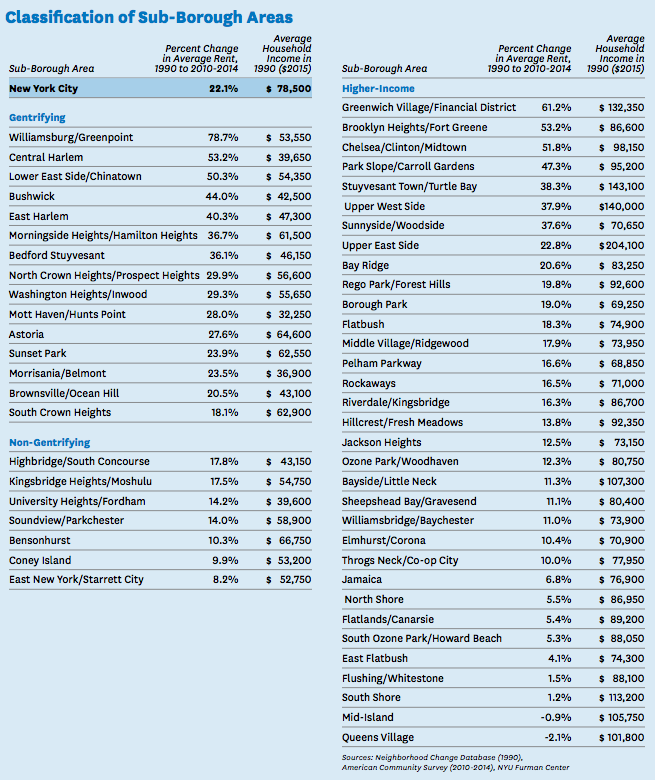 They also put the data into an easy-to-digest map format: 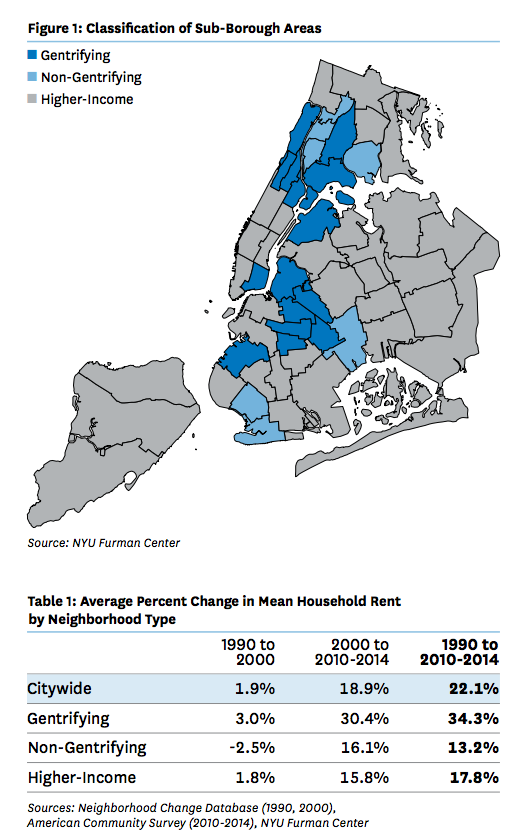 By and large, the data's not too shocking (Bushwick Daily mainly seemed surprised that their namesake neighborhood wasn't at the very top of the list, for instance), and lifelong Washington Heights resident Dennis Golin tells us, "I was definitely not surprised to see Washington Heights on the list, though within the context of the other 14 contenders it's not necessarily an excuse to throw up our arms in defeat and yell 'Uptown is Dead!'" Golin notes that longtime neighborhood businesses are still mostly thriving alongside new cafes, high-end grocery stores, etc., and adds, "So as long as the folks pushing their kids in $400 strollers make an effort to know their local Bodega guys and head to St. Nick to get a Chimi every once in a while, it's all good. And with the upcoming exodus of L Train refugees, I'm sure we'll have to deal with this phenomenon for quite a while longer!"

Elsewhere, there are some who dispute the nature of the numbers here. "The problem with the data is that they lump in unrelated neighborhoods that are completely different markets which skews the perception of what's occurring where," Welcome2TheBronx blogger Ed Garcia Conde tells us via email. "Is gentrification happening in Hunts Point? Nothing as concrete as what's happening in Port Morris, Mott Haven, Melrose, and the Concourse below 167th Street. Belmont? Nope. It's a college neighborhood in the shadow of Fordham Road."

And given how rapidly rents and neighborhoods have changed even in the past couple of years—and that the Furman Center's data looked at 2010-2014 as its most recent era—we'd be curious to see if all these findings still hold true in the next five years or so.

In any case, if you live in one of these neighborhoods, the concrete takeaways are the same as they always are: Make an effort to actually get involved with your community (attend community board meetings, patronize local businesses, say hi to your neighbors, etc.), and be on the lookout for landlords looking to cash in on the area's cache by booting out longtime stabilized tenants. Unfortunately, there's still plenty of that going around, and nowhere more than in neighborhoods that've been painted with the "up-and-coming" brush.

(H/T DNAinfo for the link)

How I found my rent-stabilized apartment

gentrification
Brick Underground articles occasionally include the expertise of, or information about, advertising partners when relevant to the story. We will never promote an advertiser's product without making the relationship clear to our readers.
Share:

What is an 'appraisal contingency,' and when is it a good idea to waive it?

The best NYC neighborhoods to invest in: 2020 roundup

Here are 5 rentals within walking distance of a NYC park