It’s fascinating to delve into stats about cities, especially if you’re preparing to relocate and trying to identify the neighborhood that will be the perfect match for you. Just in time for moving season, Citylab reports that a collaboration between MIT’s Media Labs and Deloitte Consulting has resulted in an open-source venture that eliminates the need to sift through reams of Census data when you want to educate yourself about your town. The resulting project, called DataUSA, takes the raw numbers on area demographics, crime, income, and more, and renders them into appealing, easily readable, visual form.

The site allows you to search on a small scale (counties) and all the way to a large scale, exploring data for the entire United States, for instance; you can also search across particular stats, like occupation. (Perhaps unsurprisingly, a search for “Writers and authors” reveals that the highest concentration of scribes can be found in Brooklyn.)

Locally, DataUSA proves to be an instructive tool, as well as an entertaining one. A general search across all five boroughs frequently adds up to a portrait of division, uncovering significant differences in wealth, crime, and diversity across New York.

The most dramatic economic stratification appears to be between Manhattan and the Bronx. Property values, for instance, vary strikingly: Manhattan’s is the highest, at $848,600, while the Bronx’s is the lowest, at $369,400. Area median income in Manhattan is $76,089; in the Bronx, $33,712.

This provides meaningful context into one of the reasons why Mayor De Blasio’s affordable housing plan has aroused controversy: eligibility for affordable units in new developments is based on AMI, or area median income, which is $86,300 for a family of four. The problem, as the plan’s critics note in this Gothamist article, is that AMI represents the citywide average, and therefore often does not reflect typical incomes on a more localized level—and the numbers presented by DataUSA reveal that county-based AMIs are indeed disparate. 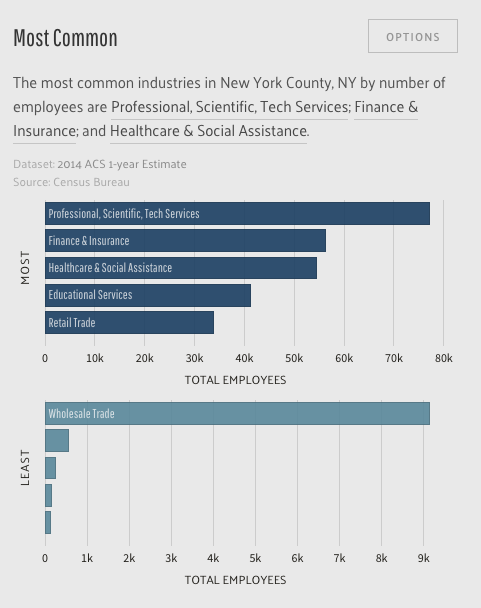 Accordingly, you’ll also find differences in career. As the city’s wealthiest borough, Manhattan is home to a high number of executives, and its most common industry is professional, scientific, and technology services. Meanwhile, in the Bronx, the most common lines of work are administration, retail, and food services, and the biggest industry is healthcare and social services.

The Bronx suffers particularly when it comes to crime, with the highest amount of homicide deaths not only in the city but the state, and the second highest rate of violent crime (Brooklyn is first.)

In many ways, Queens County seems to stand for balance. Its median income—$57,000—is right in the middle for all five boroughs, and according DataUSA’s map of income by location, the rich and the poor are less separated from one another than they are in other areas.

Queens is wide-ranging demographically, too. The borough has the lowest percentage of U.S. citizens—according to the Times Ledger, half of its residents were born in another country—and no majority in terms of race. Queens is also distinct from Manhattan, Brooklyn, and the Bronx in that most residents own a car, which makes sense considering that huge swathes of the borough are quasi-suburban and not served by subway lines.

Staten Island, on the other hand, is an outlier on several fronts. Richmond County is the least ethnically diverse, with a population that is 62 percent white, and it’s also the only borough where a majority of locals own two cars and drive to work. It’s the second-wealthiest borough, with an average income of $71,000, and its most popular industry is postsecondary education. The map of income by location on Staten Island is intriguing, with a tremendous amount of wealth concentrated in one area.

But if you’re looking to move, what you really might want to consider is commute time, understandably a major priority for New Yorkers. It isn’t a shock that Manhattanites win for the shortest journey to work—a (relatively) brief 38.6 minutes—while Queens comes in dead last at 41.7 minutes.

Track income, crime, rents, and more with the NYC data map to end all data maps

Affordable Housing health & safety
Brick Underground articles occasionally include the expertise of, or information about, advertising partners when relevant to the story. We will never promote an advertiser's product without making the relationship clear to our readers.
Share:

An adventure every morning: What it's like to commute from Jersey City to Williamsburg via two ferry lines

A renovated four bedroom in Riverdale for $1,049,000, no board approval required

Sales of Manhattan apartments slipped (again) in the fourth quarter, but there were signs of stability