The kitchen in this Chelsea one bedroom was recently renovated, but still looks dated, says Karin Ames of Neuhaus Design Architecture.

The kitchen in this one-bedroom Chelsea co-op, 331 West 14th St., #3C, was recently renovated, yet it still has a somewhat dated look about it, says Karin Ames, a project manager at Brooklyn’s Neuhaus Design Architecture. The co-op is currently on the market for $650,000.

A new kitchen will attract buyers and Ames says there are some things you can do to make it feel more modern without having to undo the renovation. The rest of the apartment could use some freshening up as well.

[Editor's Note: In Brick Underground’s Reno Ready column, an architect looks at a listing for a NYC fixer-upper currently on the market and suggests how to improve it.]

In this week’s Reno Ready, Ames offers her plans for updating the unit, including bringing that kitchen over the finish line, sorting out the “jarring” and “overwhelming” built-ins in the bedroom, and ridding the apartment of its old-school carpeting. 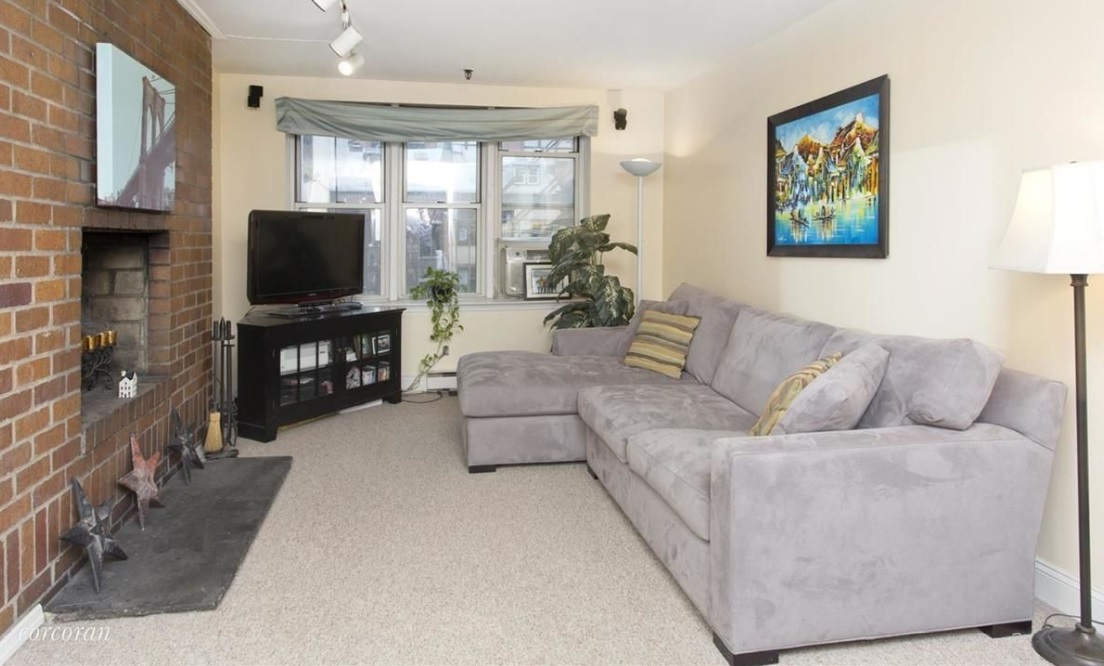 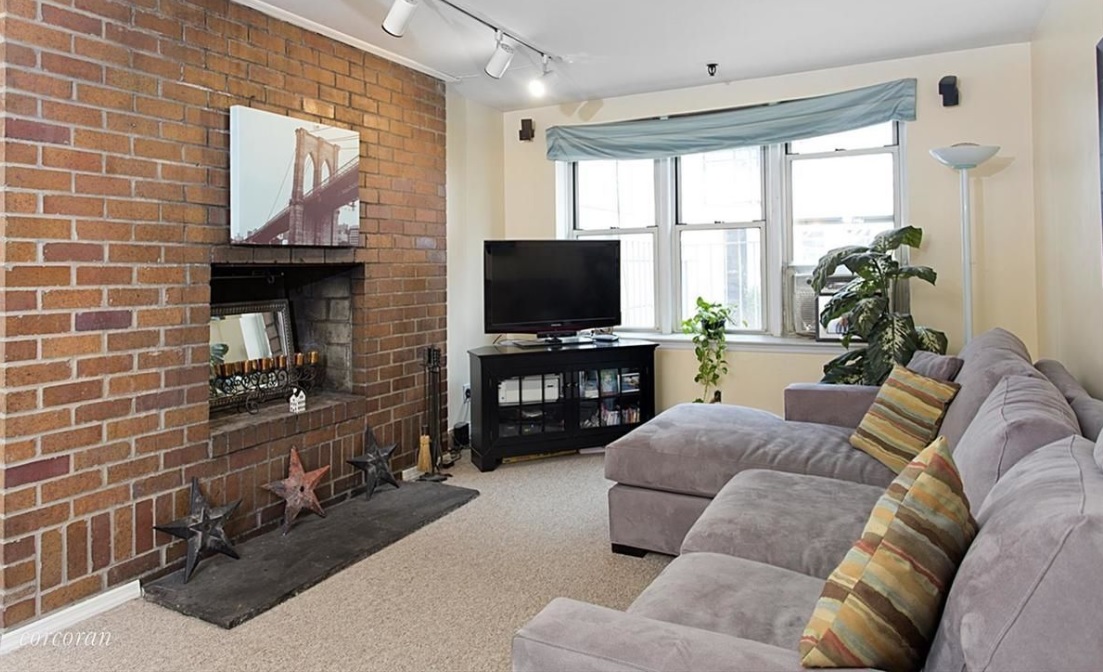 Pull up the carpeting in the living room

Flooring: The listing says that there are hardwood floors beneath the carpeting, so Ames would have that carpeting pulled up, then sand and refinish the wood in a medium-dark shade (such as DuraSeal’s Special Walnut) that’d complement the cherrywood cabinets in the kitchen (which are visible from the living space). This should cost around $5 to $7 per square foot or $3,500 for the entire unit.

Paint: She’d paint the walls “a light, breathable gray,” such as Benjamin Moore’s Calm, $80 a gallon.

Brick wall: “It’s really exciting to have a wood-burning fireplace,” Ames says, but thinks the orange wall against the orange-hued cabinets in the kitchen is just a little too much. She’d therefore recommend having the brick wall whitewashed. This should cost around $1,500.

Transom window: Ames would add a transom window to the wall between the living room and the bedroom—just above where the painting is the moment. “It’ll add openness and share light,” she says. This should cost around $5,000. 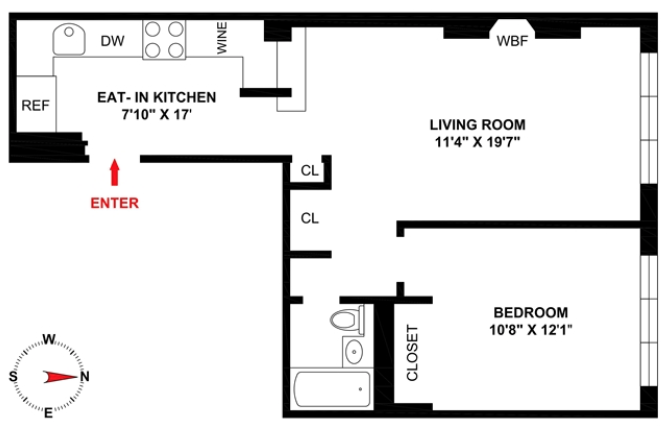 Lighting: She’d lose the lamps that are strewn about and the track lighting on the ceiling in favor of a pair of plug-in sconces that’ll flank the windows. “They will give off a lot of ambient light, help anchor the wall, and have the added bonus of a display shelf,” she says. This Dixon plug-in sconce and shelf is $299 at Rejuvenation.

Windows: To make the window area feel like more of a focal point, Ames recommends installing three-and-a-half-inch casings, a wood sill, and an apron under the sill “to give presence,” she says. This should cost around $500 per room.

She’d also add bottom-up, top-down shades from a place like The Shade Store to each window. These should cost around $1,500 for the three windows in the living room. 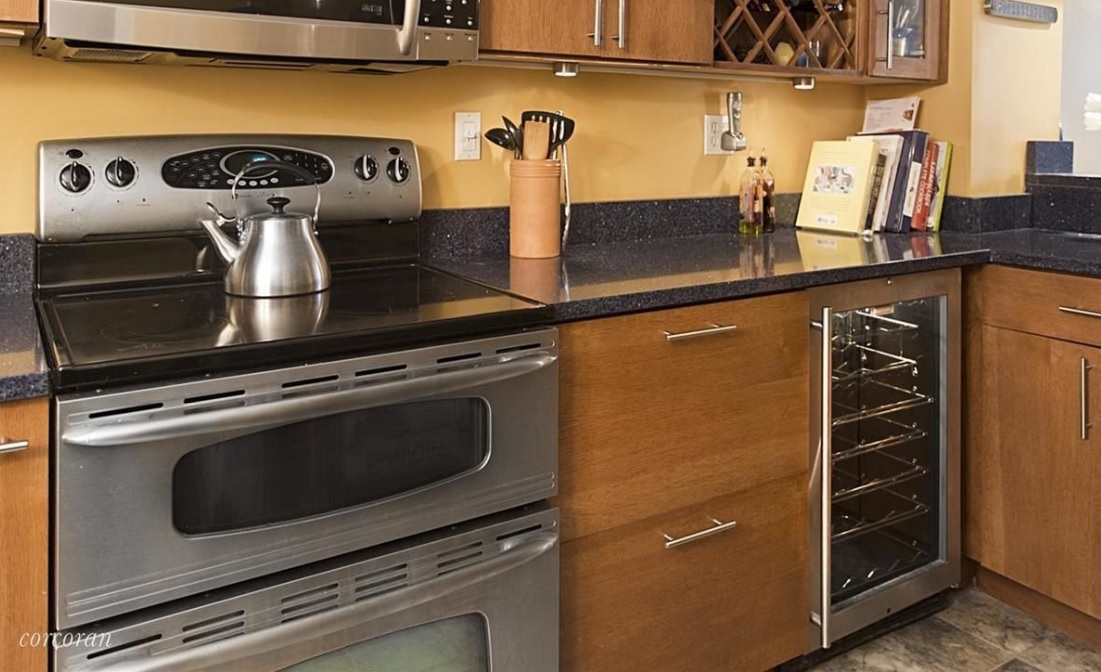 Give the kitchen a cohesive look

Because the kitchen was redone relatively recently, she’d leave most of it intact, but there are still a few things that she’d like to do to modernize it a bit.

Flooring: Ames would rid the room of the slate flooring and lay down new wood floors to match the rest of the apartment and give things a more “cohesive look.” It should cost between $10 and $12 per square foot for materials (around $2,500 for the whole kitchen).

Backsplash: She’d remove the four-inch up-turn at the back of the countertop, which she finds “jarring,” and then install a decorative tile backsplash to “lighten the mood in here.” This should cost around $2,500.

Lighting: She’d replace whatever’s up top at the moment with a newer, more stylish flush-mount. This Beacon LED from Schoolhouse is $379.

Paint: She’d cover up the yellow paint on the walls with the same Benjamin Moore Calm as in the living room. 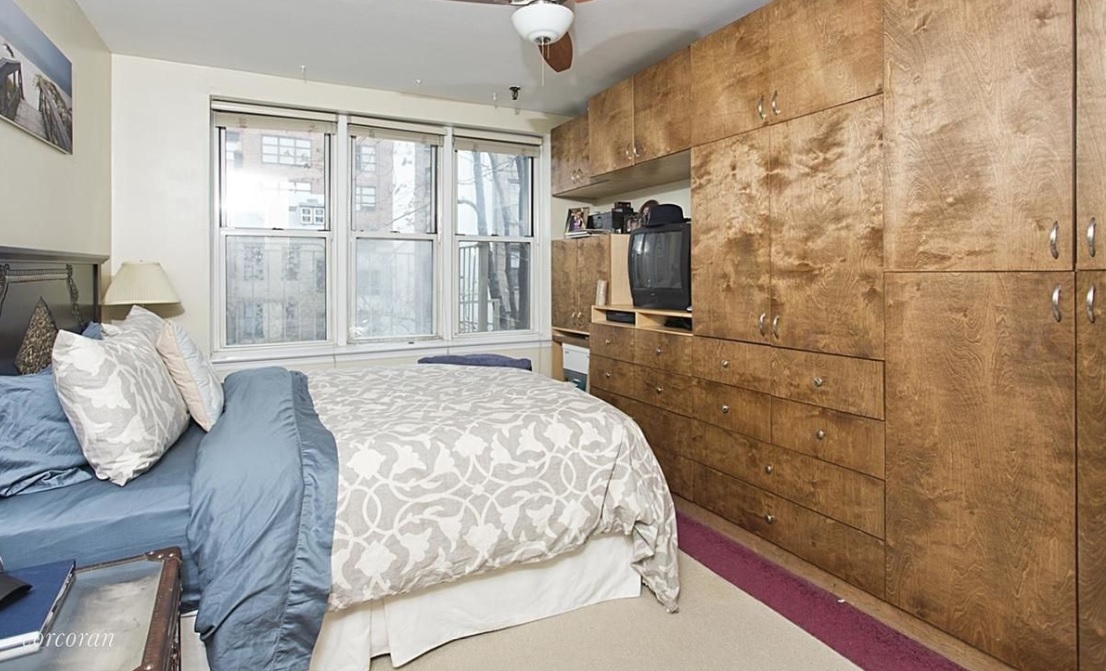 She’d pull up the carpeting to unearth the wood flooring underneath in here, too, then sand and refinish the wood. She’d also treat the window similarly to the one in the living room, adding casings, sills, aprons, and bottom-up, top-down shades.

Built-ins: “The built-in really pops out at you,” she says—except not in a good way. “It’s too big for the room. So I’d want to see that go.” Instead, she’d install a semi-custom dresser, such as the Copenhagen 10-drawer dresser in white, $1,699 at Room & Board. Installing the dresser and removing the built-ins should cost around $2,500. She’d center the new dresser at the foot of the bed to give the new occupant “some breathing room.”

Paint: “A fresh coat of paint goes a long way,” Ames says. As such, she suggests painting the walls with Benjamin Moore’s Exhale, which she describes as a “calming bluish gray.”

Lighting: She’d replace the ceiling fan because you’ll probably need something to circulate the air in here a bit. This Schoolhouse Hugh 52-inch matte white ceiling fan with light is $360. 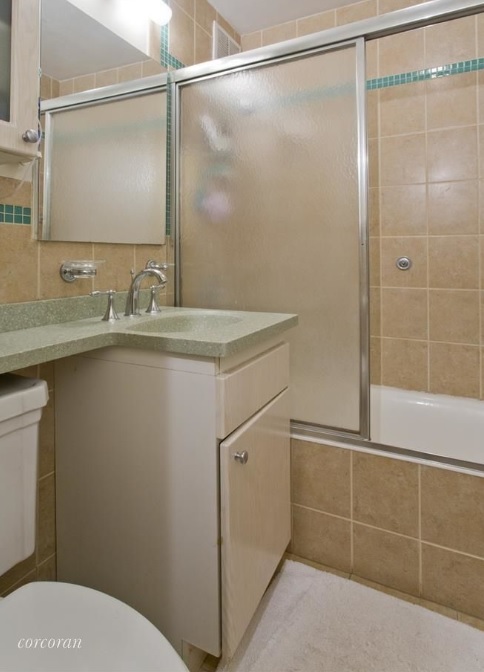 “This is going to be a gut,” Ames says. But she will hang on to the tub and toilet as they look to be in decent shape. “You can probably update the entire bathroom for $8,000 because you’re keeping the tub and toilet in their existing locations,” she says.

Vanity: She’d have a budget-friendly vanity installed, such as this Godmorgon/Odensvik two-drawer sink cabinet and faucet, $309 at IKEA.

Shower doors: She’d install new metal-and-glass shower doors from a place like Mr. Shower Door. These should cost around $2,500.

Walls: Ames would retile the walls all the way up to the ceiling with 3-by-6-inch white subway tiles. Materials should cost around $600.

Floor: She’d have half-inch penny tiles installed, such as the Nautilus by Waterworks. These should cost around $50 per square foot.

Lighting: Ames would have a new sconce put in to illuminate the space. This Alabax sconce in navy or gray is $139 at Schoolhouse.

How to save money on your NYC bathroom renovation: Where to skimp and where to splurge

IKEA vs. Home Depot: Which should you choose for a NYC kitchen renovation?

Tips for negotiating with your landlord during the coronavirus pandemic: Here’s what works

A renovated junior four in Yorkville for $935,000, no board approval required