Remember: it has to get worse before it gets better.

A bathroom renovation is less overwhelming than a kitchen renovation, and if a bathroom is badly in need of a revamp (tired grout, cracked tiles, dated fixtures, years of soap scum) the result can feel like a total transformation. Still, there can be pitfalls on the road to a refresh.

We talked to three veterans of recent bathroom renovations to find out what they learned in the process so that, hopefully, when the time comes, we can repeat their successes and steer clear of their (or their landlord's) mistakes.

Renee and her husband say they would have liked to renovate their whole one-bedroom, one-bath apartment, but it wasn't in the budget, so they opted for just the kitchen and bathroom.

"It was a rental previous to us buying it, and it was a standard, no-frills bathroom," Renee says. "The floor tile was ugly beige and light blue, the tub was old enamel and it was scratched and disgusting. There was an ugly old medicine cabinet... We wanted to make it more modern."

About Bolster's NYC Renovation Calculator: Bolster's Renovation Calculator enables you to easily calculate the estimated cost of a major New York City renovation. All you'll need to know is 1) the scope, complexity, and type of your project, 2) the quality of your desired finishes, and 3) the area being renovated. [Hint: Bookmark this page for easy reference!]

About Bolster: Bolster is a New York City design-build firm that delivers a seamless, radically transparent renovation experience--beginning with a line-by-line cost estimate that empowers you to plan your scope, budget, and schedule.

Standard: The quality of the finish is acceptable with attention to detail but reliant on big-box store sourced cabinetry, MDF etc.

Mid Range: The quality of the finish is good (grade A) with attention to detail but reliant on big-box store sourced cabinetry, MDF etc.

High Range: The quality of finish is high (grade AA) and customized with fine finishes and materials being used that can last years, if not a lifetime.

Upscale: The quality of finish is the highest possible (grade AAA) and labor-intensive, with every surface bespoke, new, and beautifully finished.

Medium: Average design, moving of some systems and/or structural changes, no elevator in the building.

Build with some Design: Full build services and some design with minimum compliance.

Build Only: Full build services with no design input (performed by another architect or not required at all).

0 0
Start Your Project With Bolster

She looked at the IKEA pieces in person, but she ordered the rest of her elements online, and was pleased with the process and the results.

Emily and her husband bought a three-bedroom, two-bath, prewar co-op in Windsor Terrace that was in need of some serious work. She estimates that the bathrooms—done in unappealing shades of pink and yellow tile (pictured below)—had been last updated in the 1950s.

"They were in good condition, but so hideous," she says.

Their plans were to do a major upgrade to both, but not gut-renovate them. But when the downstairs neighbor reported a previous major leak from the master bedroom's stall shower ("They must have heard us rip up the floor," Emily says), it became a gut renovation.

Emily and her husband were able to get the management company to pay for half of the work. 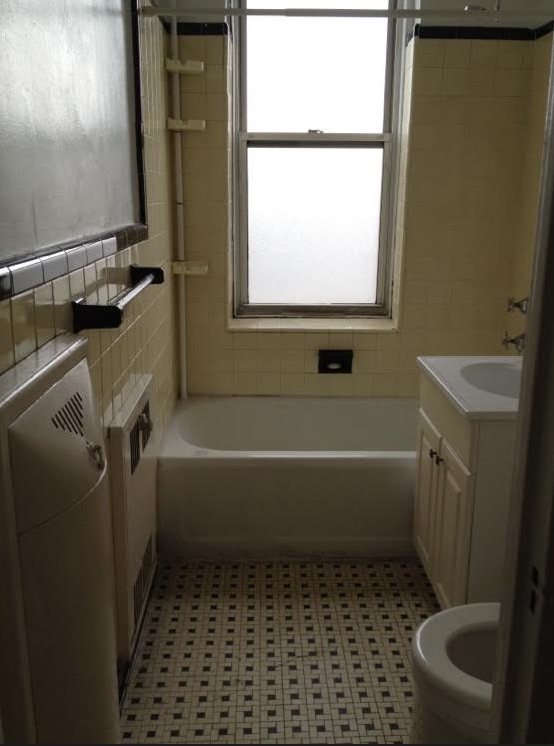 In the full bathroom with the tub, they also chose the less expensive tub option of re-glazing. The lower half of the wall tiles around the tub were also glazed, and also in bad shape. They installed a new floor of penny tile, and replaced the shower window's corroded frame. They replaced the light and mirror, but kept the toilet and the vanity.

In the smaller master bedroom bath, they glazed the sink and tiled every wall, but for one small area. They used some narrow subway tile that they had originally intended for the kitchen, but disliked when they saw it in place. They shopped for new light fixtures and hardware online, using sites like Houzz, and were pleased with the results.

A leaky pipe behind the bathroom wall of Lisa's two-bedroom, one-bath rental prompted her landlord to do a gut renovation. The room in the 120-year-old building was gutted to the beams, revealing rotted wood under the floor and additional damage.

"That's when they learned how big of a job it was," she says. "All the estimates were under."

A dispute between the contractor and the landlord, who was footing the bill, ensued. The exterior of one wall of the bathroom was part of an air shaft, and when new tile was installed, it crumbled under the weight, meaning it had to be rebuilt. The old, iron, claw foot tub was replaced with a new, wider one that covered part of the doorway.

For all the grief, Lisa loves her new bathroom.

NYC Renovation Q's renovation
Brick Underground articles occasionally include the expertise of, or information about, advertising partners when relevant to the story. We will never promote an advertiser's product without making the relationship clear to our readers.
Share:

Can NYC landlords raise rents during the pandemic?

Ways to get around NYC's steep income requirements for renting, now that a larger deposit is not an option

My co-op board interview: I had a virtual interview with very little small talk

How to tell if a co-living company is legit or sketchy: Lessons from Bedly's meltdown