This West Village studio has high ceilings, exposed brick, and a loft bed—which will likely put some folks off. Douglas Elliman

For some folks a loft bed is a nonstarter. But if you don’t mind a bit of a climb each night, be sure and check out this West Village studio at 10 Christopher St., #7C. It has high ceilings, an exposed brick wall, and room for an office/dressing area below the loft. Best of all, it’s a condop, meaning it’s a co-op with condo rules, so you won’t need to pass a board interview in order to snag the place. But it’s expensive. At $749,000, its list price is well above the $599,000 median for a studio in the neighborhood. 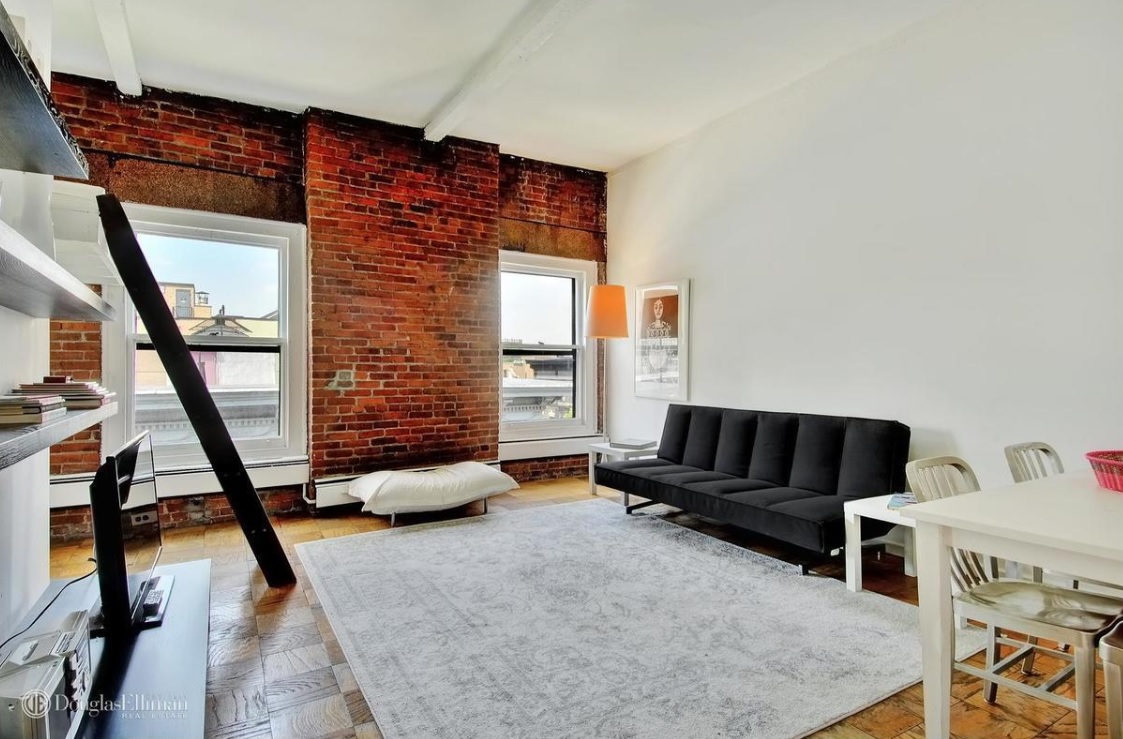 The living room is a decent size, and seems even bigger thanks to beamed ceilings that are more than 10-feet high, and three large—if somewhat grimy—windows facing west that usher loads of light into the space during the day. Oak hardwood flooring runs underfoot, but it looks like it’s seen better days, which is probably why it’s mostly covered by a rug. The exposed brick wall is similarly beat up, with some spots that look to be crumbling, some sporting mismatched bricks, and others missing bricks entirely. While it probably isn’t a safety hazard, the degree of destruction does render a typically charming feature rather repellent. 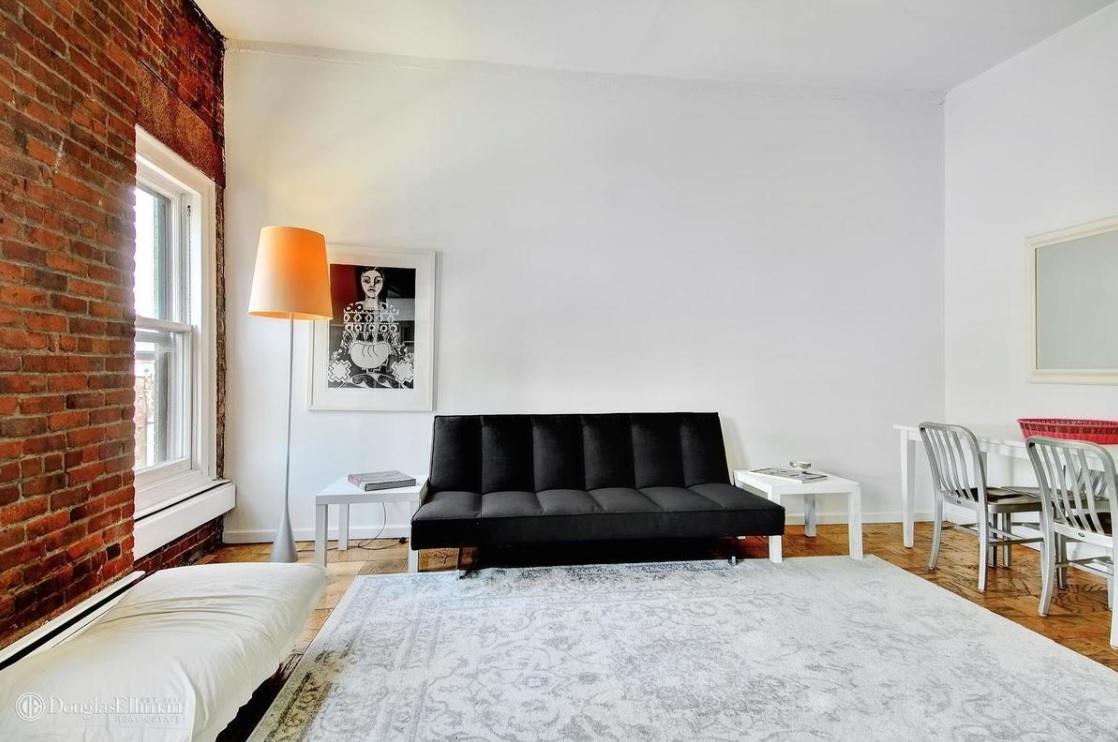 As it’s currently staged, there’s a seating area with a couch that’s flanked by two side tables, a narrow dining table, a low-slung TV stand with a flat screen, some shelving for assorted knickknacks, and a single, sad-seeming lamp. Some sconces and a pendant light or two will go a long way toward brightening up the room—especially at night when those windows won’t really help with illumination. The only closet in the apartment is in the foyer—right when you walk in. 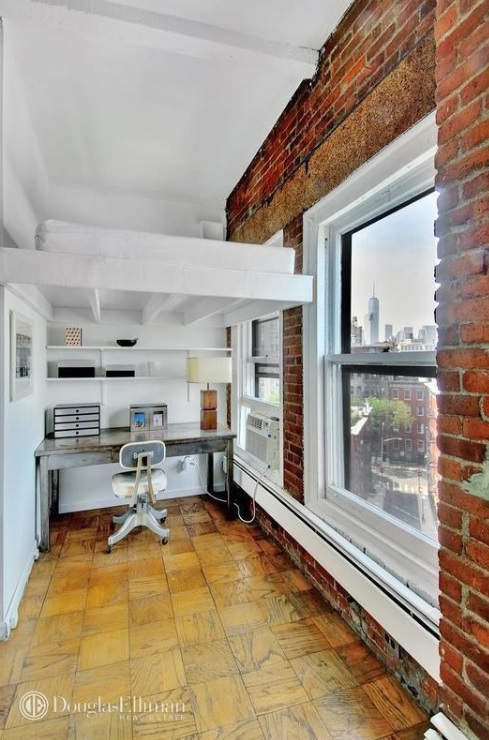 Scramble up the ladder after a long, hard day to the queen-sized sleeping loft, which looks to be disturbingly close to the ceiling. Those who are prone to claustrophobia would be wise to move their beds to the main living space, and instead use this loft area for storage.

The space beneath the loft is presently being used as an office, but it could also work as a dressing area or a cozy reading nook. 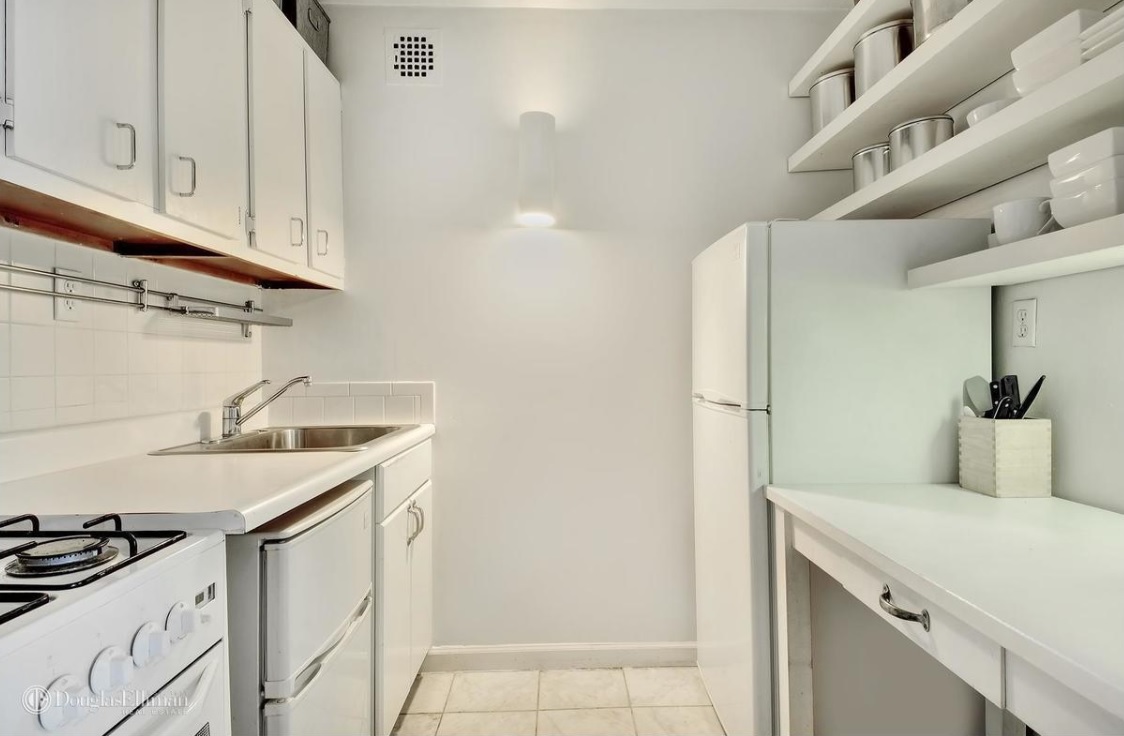 The separate kitchen is whiter than white with white walls, white cabinets, white countertops, a white backsplash, white tiled floors, a white range, a full-sized white fridge, and what looks to be either a second, smaller white fridge next to the oven or a white drawer dishwasher. Trying to keep this room clean will surely drive some people crazy. But there’s a decent amount of (white) workspace and tons of (white) storage, so it seems like it’ll be fairly easy to cook in here. 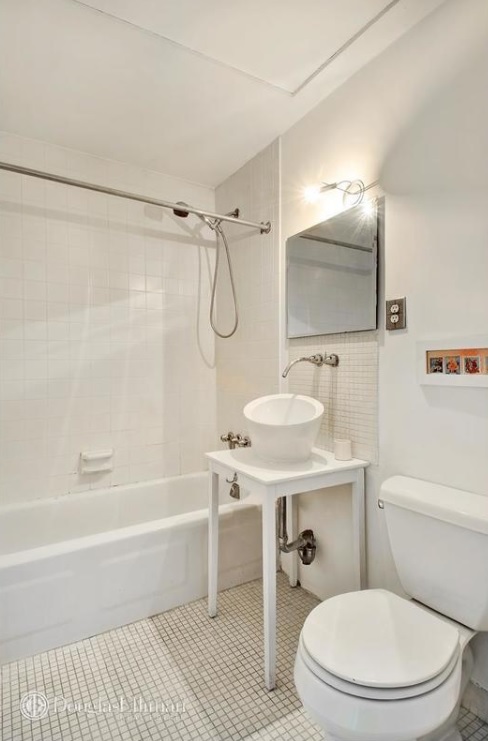 The bathroom is also rather monochromatic with white tiled walls, a white tub and toilet, and a white vessel sink atop what looks to be a table of some sort. An actual vanity would probably work better in here since there doesn’t seem to be anywhere to store toiletries. The grubby flooring would also benefit from a vigorous mopping. 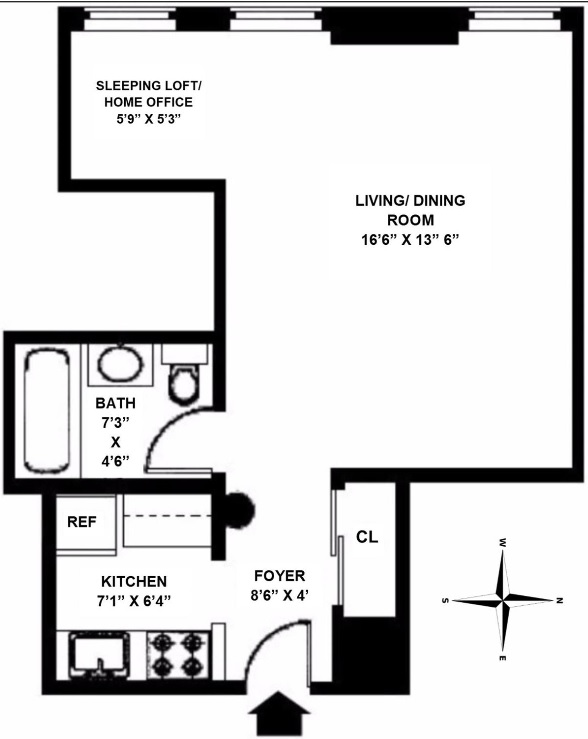 The studio is located in a pet-friendly prewar condop building with a live-in super, on-site laundry, and an elevator. Pieds-à-terre are permitted, and the sublet policy is fairly lenient. Maintenance is $932 a month.

It’s also close to a number of public transit options, including the A, B, C, D, E, F, and M trains at West 4th Street/Washington Square and the 1 at Christopher Street.

Living above it all: get the most out of a loft bed

What’s a condop? What do I need to know about buying or selling one in NYC?

How to build your own loft bed, the unaffordable affordable housing, and more

Small Wonder studio West Village
Brick Underground articles occasionally include the expertise of, or information about, advertising partners when relevant to the story. We will never promote an advertiser's product without making the relationship clear to our readers.
Share:

How to add a second, full bath to an UWS junior four apartment

Ask Sam: How do I succeed a relative in a rent-stabilized apartment?

What you need to know about buying in a boutique building

Neighborhoods to watch in 2020, hundreds of buildings have facade violations, & more