This massive house in Queens comes with private beach access

This big house in exclusive Douglas Manor is not for the flash-averse.

This center-hall colonial in Douglaston, Queens comes with something practically unheard of within city limits: the shared rights to a private beach.

Three hundred families have the privilege of access to this portion of Little Neck Bay. The party poopers at the Queens Times Ledger point out, though, that Douglas Manor Beach has been ranked worst in the city for pollution and sewage bacteria content. The city monitors pollution levels, and issues warnings on days they are too high to swim safely.

Still, the Long Island Sound is nice to look at, and boaters can access the locals-only dock a block away, maintained by the Douglas Manor Association.

Until two weeks ago, the the 4,656-square-foot house at 604 Shore Rd. held the record for the most expensive sale in Queens, according to listing agent Michael Misiti of Douglas Elliman. Now listed at $6,75 million, the house was last purchased for $5.3 million back in 2006. The owners subsequently renovated the heck out of it. 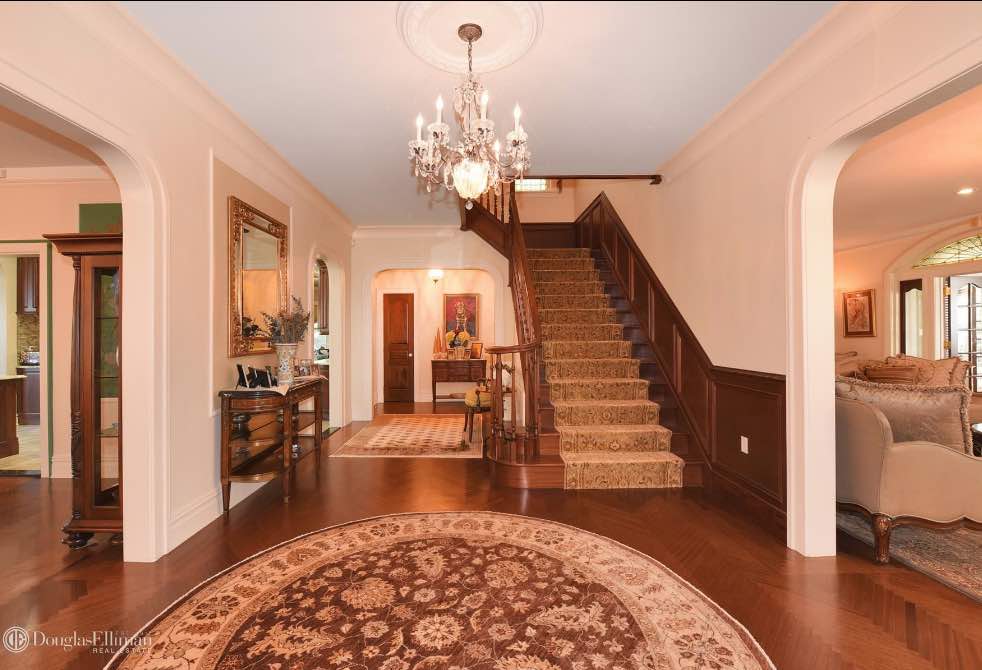 The results are opulent, and highlight the house's classic feel. 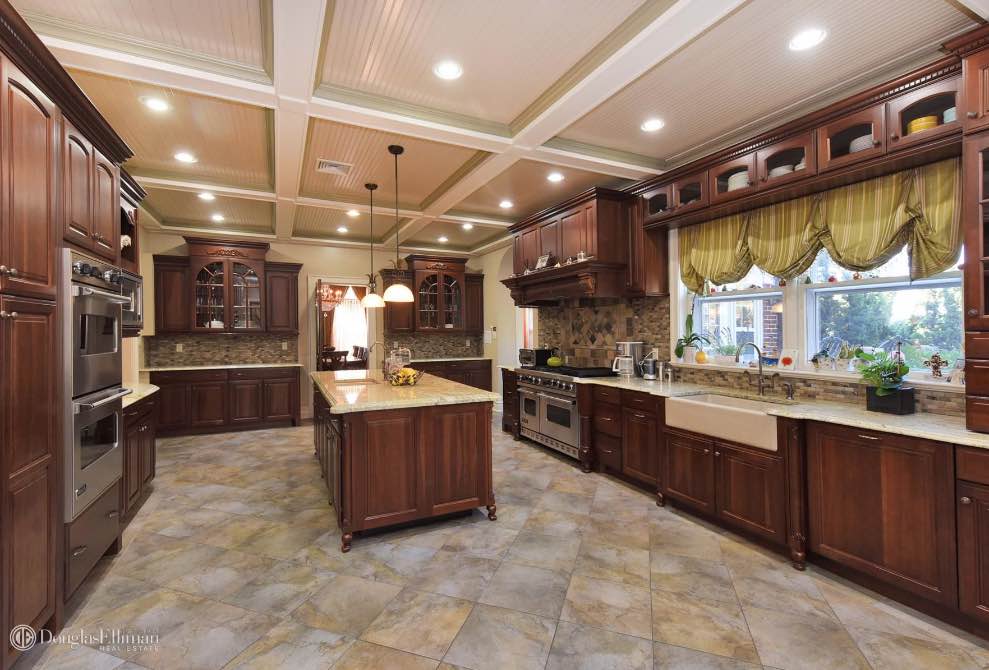 This kitchen is huge, and the cherry cabinetry is custom-engraved. 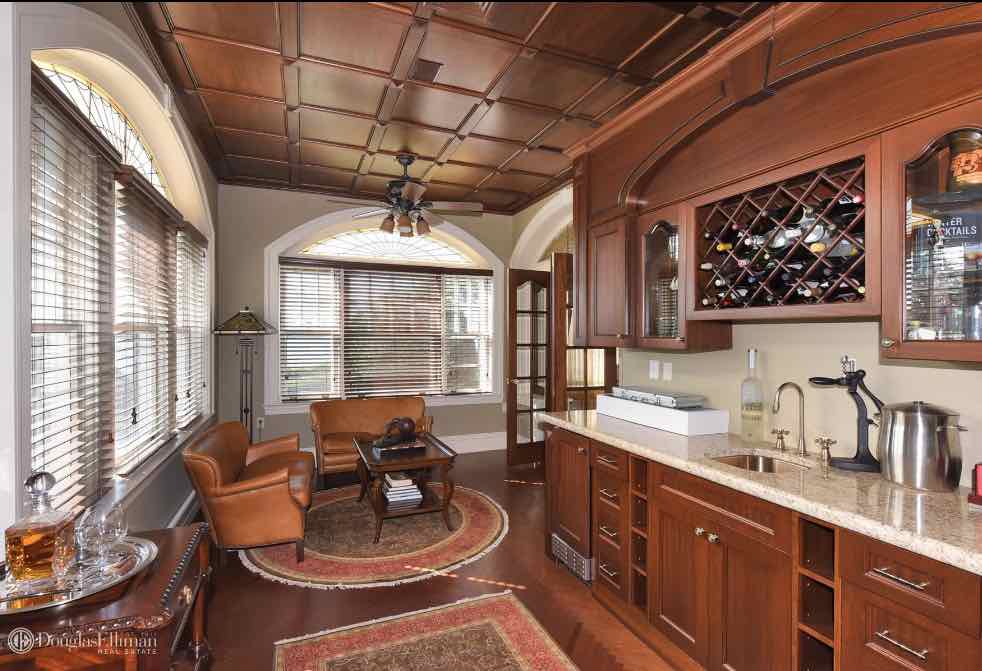 There is a matching bar area with a built-in wood wine cradle. The wood paneling is reminiscent of the pricey Library Bar in the Hudson Hotel. 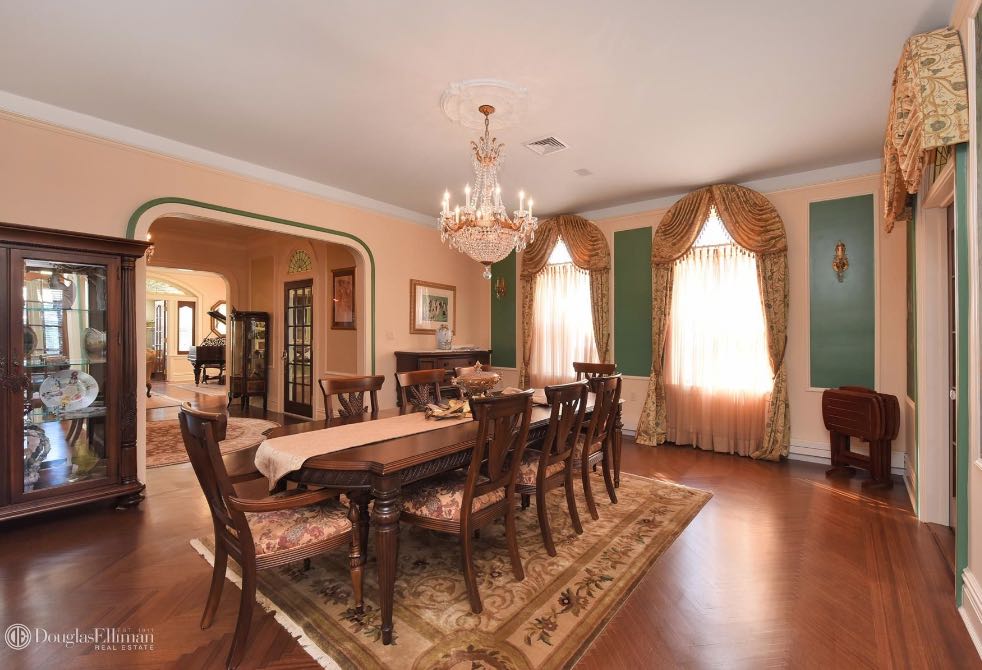 The foyer and dining room both have oak herringbone floors. The dining room also features three panels of original, 100-year-old wallpaper that the owners kept. 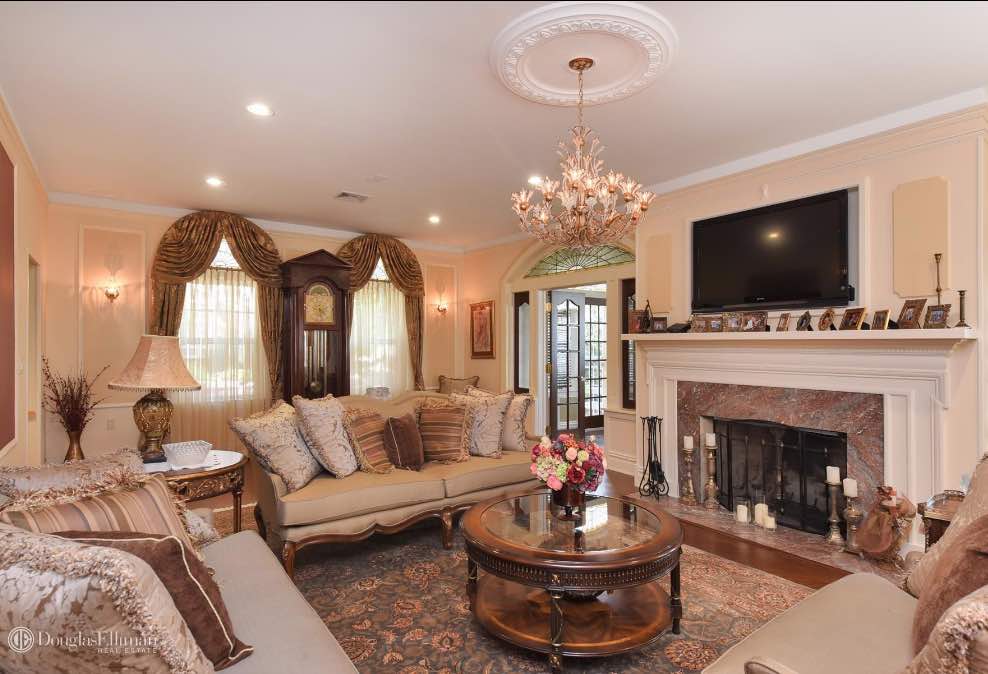 The living room has a fireplace set in striking red and grey stone. 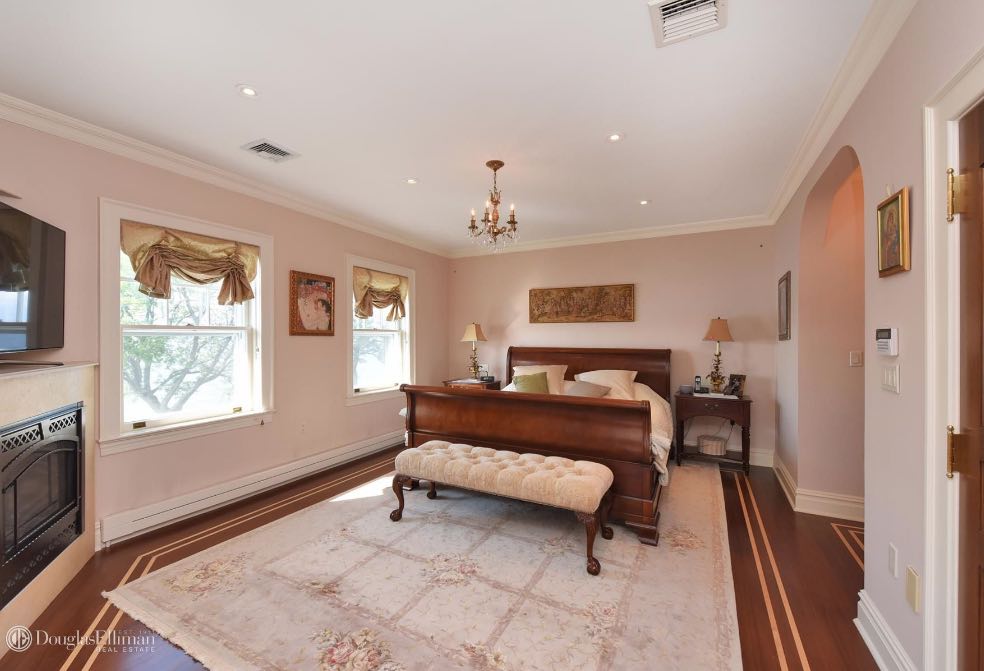 Upstairs there are five proper bedrooms. There are additional changing rooms that were originally built  for household staff, according to Misiti. This could bring the total to eight bedrooms, if one was so inclined. The master bedroom has a fireplace below a TV hookup. 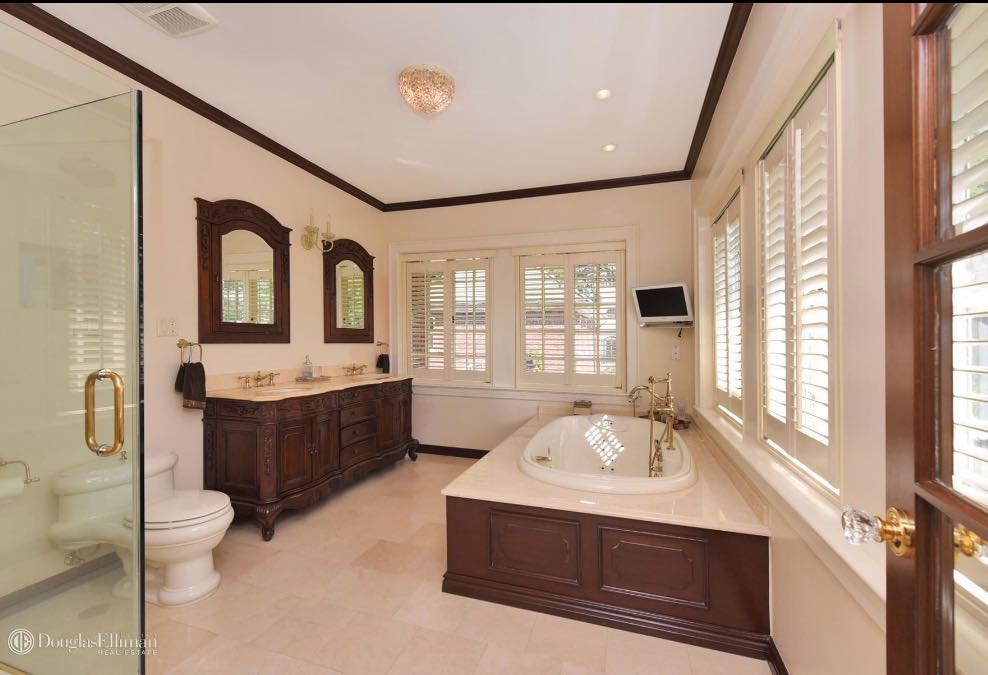 This bathroom has a freestanding glass shower, and a separate bathtub with wood paneling. There is also a large vanity with double sinks. 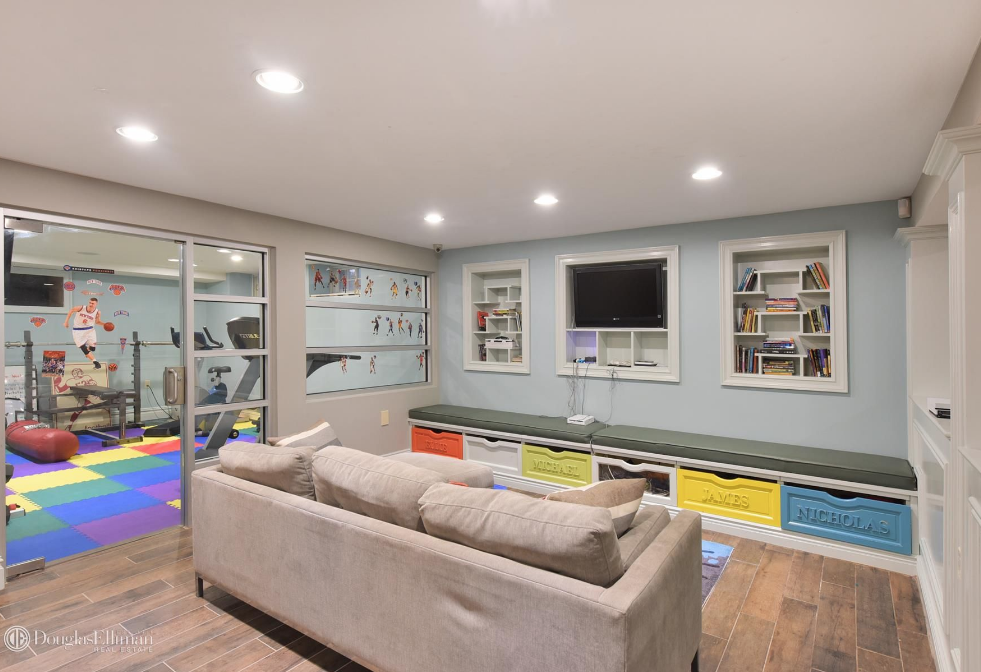 In the basement, there are two separate media rooms and a home gym. 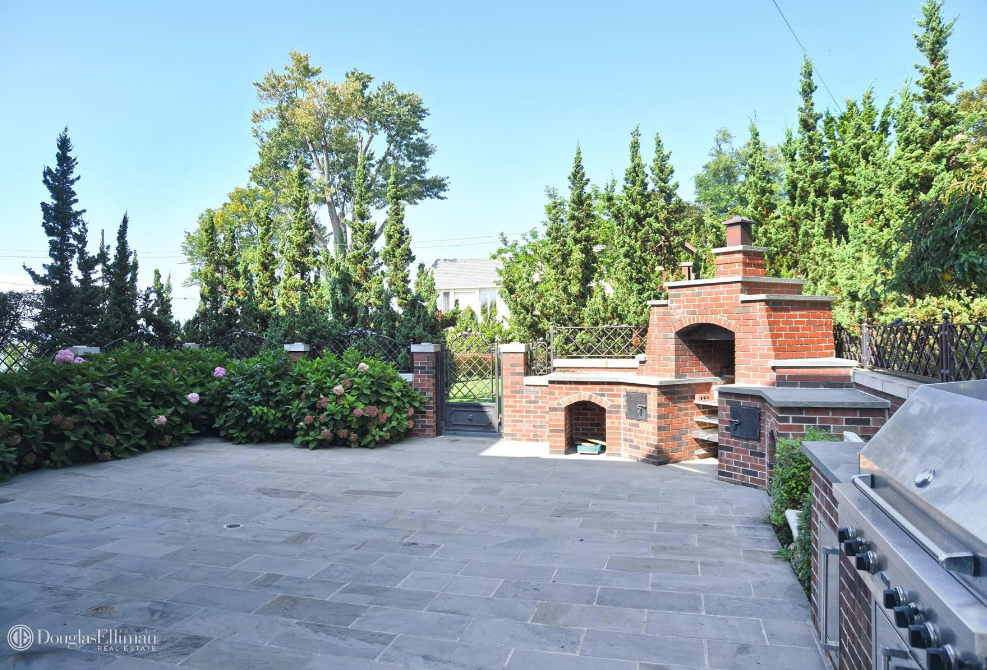 Out back is a slate patio, a built-in grill, and a brick pizza oven. 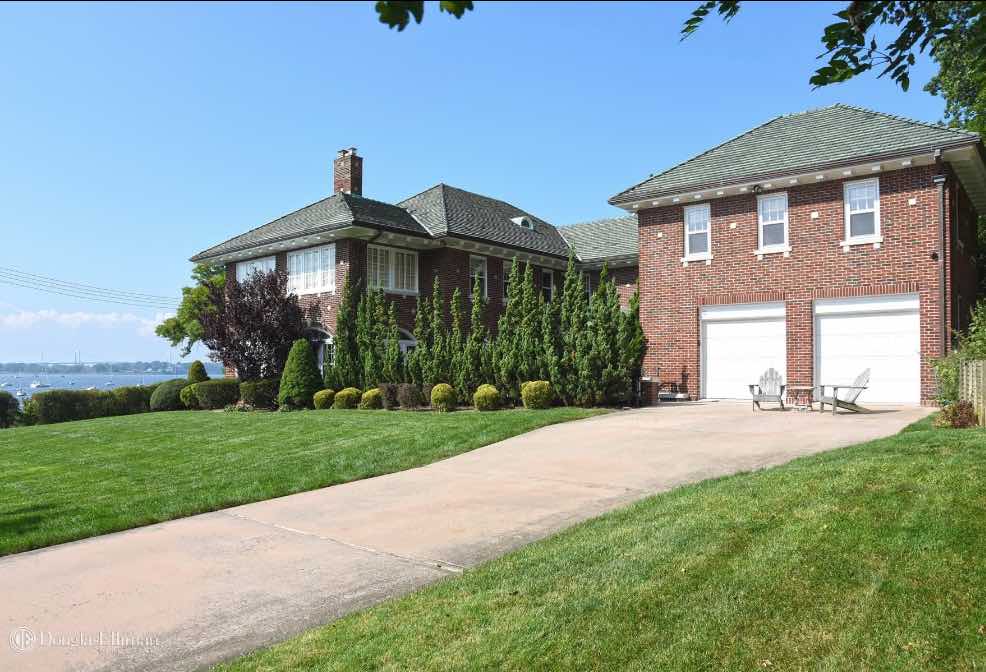 The two-car garage has a guest suite upstairs. The house sits on more than half an acre.

Commuting into the city during rush hour takes around an hour to an hour and a half by car, Long Island Rail Road, or express bus. The Douglaston LIRR stop is a little less than a mile away, at 41st Avenue. The QM3 express bus stop is three blocks further, at Northern Boulevard, where there is also a small commercial strip.

Suburbs in the city: Buy a house, get a yard, save majorly on taxes

This Forest Hills mansion comes with access to a private park

Beaches of the boroughs: Where to get sun and sand without leaving the city

amenities house parking Queens suburbs
Brick Underground articles occasionally include the expertise of, or information about, advertising partners when relevant to the story. We will never promote an advertiser's product without making the relationship clear to our readers.
Share:

How to keep your NYC apartment cool: In-window, through-wall, split unit, and other types of air conditioners

Ask Sam: Is a landlord allowed to 'warehouse' vacant apartments?

A historic West Village townhouse with a garden and five fireplaces, for $5,595,000